Home Uncategorized Uggie The Dog to Steal The Show? 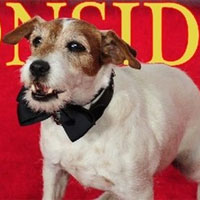 A slew of A-listers like Toms Cruise and Hanks have been announced as presenters for this year’s Academy Awards, but The Artist star Uggie the Dog might steal the spotlight; he’s set to appear in a skit with show host Billy Crystal. Details haven’t been released on what the man and canine duo will do, but we’re excited nonetheless.

Uggie has the most nominations for this year’s Golden Collar Awards for his performances in The Artist and Water For Elephants.

It was announced last week that, despite his success, the pooch will be retiring from show business this year. Perhaps he’ll be retiring to Florida.