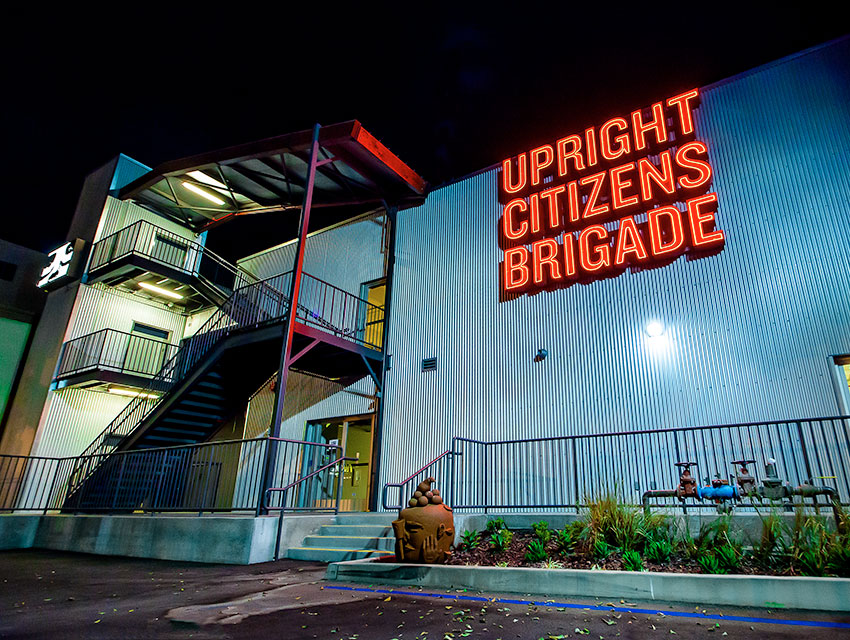 Call it the dawning of the comedy-industrial complex. Call it evolution. Call it what you will. If you’re used to sitting in rickety chairs in cramped black box theaters to catch the best joke slingers in Los Angeles, get ready to broaden your horizons.

On November 1, Upright Citizens Brigade will officially open its new comedy mega-complex in Hollywood. Located at 5419 Sunset Boulevard (the corner of Sunset and Western) the two-story, 30,000-square-foot facility includes 14 classrooms (three of which are dedicated to sketch writing), video production offices, street side retail stores, a casual performance space and café that serves sandwiches and freshly brewed Stumptown coffee (Inner Sanctum), and the centerpiece: a spiffy new 85-seat theater (which is actually smaller than the 120-seat theater in UCB’s current L.A. facility).

Speaking of the “old” UCB facility at Franklin Avenue near Beachwood, it’s not going anywhere. UCB is holding onto the space and will continue to mount shows there. But the new facility is much larger and better appointed. With an expanded roster of classes and performances, look for UCB Sunset to become the nucleus of UCB’s growing empire—and maybe of the L.A. comedy scene.

UCB Sunset represents the natural evolution of what’s been happening in American comedy in the last five years, and nowhere is that boom more exciting than in Los Angeles. What used to be called “alt comedy” has simply become comedy. Podcasting and online outlets like YouTube and Funny Or Die have allowed comedians to reach new audiences and build fanbases without leaving home. The funniest shows rarely happen in traditional clubs with a two-drink minimum. Instead, they occur at house parties and in small rooms such as Nerdmelt, UCB, the recently opened Clubhouse, and dozens of others around the city.

A community that big needs a clubhouse—more than one of them, actually.

UCB Sunset, while teaching comedy as a career (and making a tidy profit doing it), has erected something of a community center where joke peddlers can hang out, work on new material, bounce ideas off each other, and rub elbows with successful comedians while doing it.

A few miles west, another juggernaut of L.A.’s comedy scene, Nerdmelt, is reportedly expanding into the space next door—a facility where they can serve booze. We truly are living in the golden age.

Upright Citizens Brigade emerged from Chicago’s ImprovOlympic in the early ’90s before relocating to New York. In 1996, the troupe opened a theater in a former strip club in Chelsea. The L.A. outpost of UCB opened in 2005.

Nailed It! Host Nicole Byer Keeps Pushing the Envelope in All the Best Ways