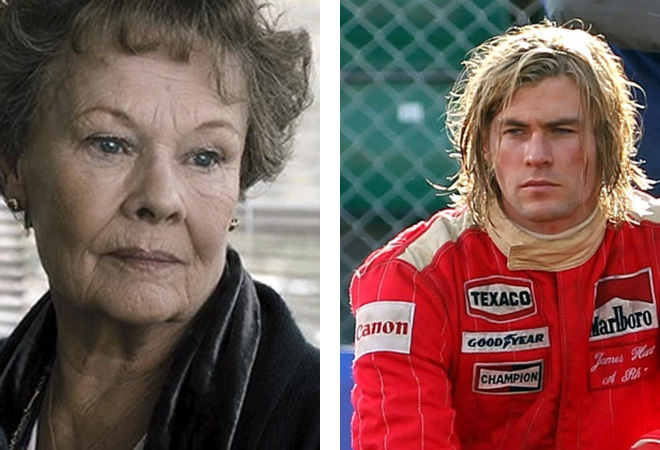 Haven’t seen all ten Best Picture nominees for this year’s Golden Globes? This crib sheet won’t help you win your office pool, but it will keep you from making a gaffe during commercial breaks. The award show airs on Sunday, January 12 at 5 p.m.

12 Years a Slave
The film, based on an autobiography by Solomon Northrup—who was born free but kidnapped and sold into slavery—offers a bracing look at the most violent practice in U.S. history.
POTENTIAL GAFFE ALERT: It was directed by Steve McQueen, who is neither a late actor nor a late fashion designer.

Captain Phillips
The Tom Hanks starrer is based on the true story of merchant mariner Captain Richard Phillips, who was taken hostage by Somali pirates in 2009.
POTENTIAL GAFFE ALERT: Don’t take all of the film’s plot points as fact, especially the one where Hanks-as-Phillips says, “If you want to shoot somebody, shoot me!” The seaman reportedly offered up no such heroics in real life.

Philomena
You didn’t see this film but your parents did—and they loved it. If by some strange occurrence they missed out, tell them to rush to the theater and watch it.
POTENTIAL GAFFE ALERT: None needed.

Rush
One of the hunky Hemsworth brothers (does it matter which one?) stars in the best race car drama since Talladega Nights, and maybe even since Days of Thunder.
POTENTIAL GAFFE ALERT: Please don’t confuse this film with the 1991 druggie drama starring Jason Patric and Jennifer Jason Leigh or the Canadian prog rock band with Neal Peart on drums.

American Hustle
With nods in all of the major acting categories plus two more for its screenplay and directing, the film has gotten its share of critical praise. What hasn’t gotten its due:  Christian Bale’s elaborate comb-over, Jeremy Renner’s towering pompadour, and Bradley Cooper’s poodle perm. Just ask style editor Linda Immediato.
POTENTIAL GAFFE ALERT: When a movie’s hairpieces are so prominent they deserve costarring credits, you can weigh in without fear of embarassment.

Her
The future of L.A. looks bright—or at least awash in pretty earth tones—in Spike Jonze’s drama about a man who falls in love with his (super high-functioning) operating system.
POTENTIAL GAFFE ALERT: A review in the New York Times scoffed at the presentation of so much rail in our city, but guess what? That subway to the sea is real, and we’ll all be riding it in the future.

Inside Llewyn Davis
The Coen Bros. directed this movie about a perennially unlucky troubadour trying to make his way in the Greenwich Village folk scene of the early ’60s. Plus, there’s Justin Timberlake as a twerpy, turtleneck-wearing singer and John Goodman as a heroin-addicted jazzbo.
POTENTIAL GAFFE ALERT: His name, as he explains in the movie, isn’t Llewellyn. It’s Lllewyn. It’s Welsh. It has two “Ls.”

Nebraska
Omaha-born director Alexander Payne casts former SNL player Will Forte as a dutiful son and Bruce Dern as his crusty old dad in this road trip dramedy.
POTENTIAL GAFFE ALERT: If you insist on rooting for Missouri or Oklahoma, have the good sense not to brag about it. Instead, congratulate Cornhusker fans on a well deserved win in the Gator Bowl.

The Wolf of Wall Street
What Martin Scorsese did for Italian-American gangsters—glorifying a high-powered but essentially reprehensible career choice—he aims to do for Wall Street speculators. Leonardo DiCaprio stars as con artist stockbroker Jordan Belfort. These days, the real Belfort is a motivational speaker, so all’s well that ends well, right? Not according to his daughter.
POTENTIAL GAFFE ALERT: Don’t mention what a killing you made with your pyramid scheme.