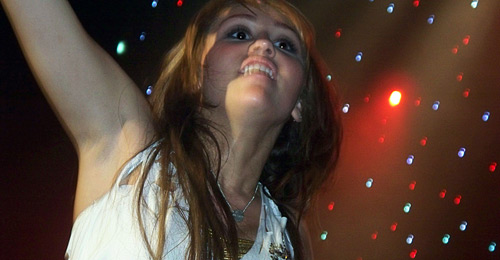 “I wonder who’s going to come out first,” my little sister squealed with anticipation. “Miley Cyrus or Hannah Montana?!” Squinting to see if she could make out brown or blonde hair at the start of Cyrus’s “Wonder World” tour concert I took her to at Staples Center last Tuesday night, she explained that Cyrus did sets as both Hannah Montana and herself on her last tour. I focused my eyes on the stage before me—trying my best to care—until Cyrus herself, brown extensions and all—strutted on stage.

From that minute on she held the audience captivated throughout a 90-minute set complete with clear vocals and well-executed dance moves. She navigated through material from all three of her albums. She sang “7 Things” from last year’s Breakout, “See You Again” from Meet Miley Cyrus (her first non-Hannah album), and her latest single “Party in the USA,” in which she demonstrated semi-credible rap skills. Perhaps in an effort to please the parents in attendance, Cyrus concluded “Fly on the Wall” with a mini-“Thriller” tribute that included Vincent Price’s laugh track and changed a Jay Z shout-out in “Party in the USA” to a Michael Jackson one, paying homage to the recently deceased pop star.

That’s not all. Cyrus danced atop moving set pieces, changed costumes nearly every other song, and flew above the audience in a cherry-red motorcycle during a cover of Joan Jett’s “I love Rock and Roll.” During the environmentally-charged “Wake Up America,” destructive scenes associated with global warming were projected on large screens behind her as she belted out, “We’re all in this together/It’s our home so let’s take care of it.” Disney’s involvement in the production—not that it really mattered—became blatant halfway through the show when Cyrus introduced a trailer for her upcoming movie, The Last Song. She followed the trailer with a ballad from the film while clips played on the screens behind her, which proved more entertaining than the song itself.

Still, despite the lighting effects, top-quality sets, and Cyrus’ valiant efforts, the real entertainment at Staples Center that evening was the audience itself. Four- and five-year -olds wore Miley Cyrus shirts so large they doubled as floor-length dresses. Some tweens came outfitted in Hannah Montana costumes, some in home-glittered fan tees. They all knew the lyrics to every song and screamed at the top of their lungs, flashing Miley posters and too-expensive concert programs next to the moms and dads who sat through it all. In fact, for all the noise and energy in the room, I was surprised when I turned around to see the audience behind me and it appeared as if everyone was sitting down. They weren’t. The teenyboppers were just too – well, teeny – to be seen standing.