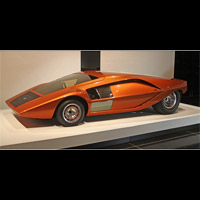 With its centennial around the corner, Gruppo Bertone, the Italian automobile company known for its revolutionary designs for Ferrari, Lamborghini, Fiat, Alfa Romeo, and numerous other manufacturers, has plenty to celebrate. Bertone’s brand and design director Michael Robinson will be coming all the way from Caprie to discuss 100 years of automotive style at the Petersen Automotive Museum on August 21. Why all the buzz? Museum curator Leslie Kendall tells us.

Q: What’s the point of a talk like this?
A: We like museum visitors to come in and see the people that are actually responsible for what they drive today.

Q: What will museum visitors learn?
A: Coachbuilders worked in two ways. They would build one-off prototypes for major manufacturers and one-off commissions for very wealthy customers, or they would work with major manufacturers to restyle existing vehicles and design new models from scratch for public consumption. It’s kind of the automotive equivalent of couture versus ready-to-wear.

Q: Why is Bertone important to L.A.?
A: You can consider two regions of the world in modern times that have had more influence on car styling than any other. One of them is Southern California; the other is Turin, Italy.

Q: Got any cool Bertone cars?
A: We’ve got the 1970 Lancia Stratos 0 prototype by Bertone. This is the lowest, sexiest, most wedge-shaped car you could possibly imagine. It turned the design world on its ear.

Q: How did it do that?
A: Bertone, and the folks that were working with him in his studio, threw away all of the previous design precepts. It was so cab-forward that in order to get out of the car, you had to lift the windshield and step out of it. In 1970 it must’ve seemed like something landed from the moon.

Q: Which Bertone car is your favorite?
A: The 1953 Dodge Storm Z-250 by Bertone. It’s a lightweight car with a V8 engine from the period. We didn’t explore the limits, but I think it could easily exceed 110-120 miles per hour.

Q: Aside from cool cars, what’s the takeaway from Bertone?
A: These guys have an enduring relevance: They’re not only important historically, but they continue to blaze new trails. You look at the designs today, and they’re still throwing away the rulebook.