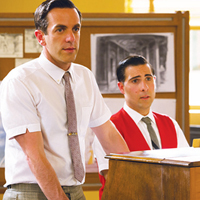 A STEP IN TIME: The Sherman brothers (left) and their onscreen counterparts. Photograph courtesy of Disney Enterprises

It’s been almost 50 years since the 1964 musical Mary Poppins premiered at Grauman’s Chinese Theatre (and made $100 million at the box office), but half a century later just a few rousing bars of “Let’s Go Fly a Kite” can flood our collective memory bank faster than you can say supercalifragili… Well, you know the rest.

The two men to credit (or is it to blame?) for the most famous Disney earworms are surprisingly unknown. The Sherman brothers, one of the most prolific songwriting duos of the 20th century, started out penning pop hits for former Mouseketeer Annette Funicello in the early ’60s. They went on to conjure the score for Mary Poppins and a host of other movies that are now cultural touchstones, including The Jungle Book and Chitty Chitty Bang Bang as well as the stickiest of Disneyland theme songs, “It’s a Small World (After All).”

The Shermans’ legacy is celebrated in the film Saving Mr. Banks (in theaters now), which is based on the epic battle between Walt Disney (played by Tom Hanks) and P.L. Travers (Emma Thompson) over the film adaptation of Travers’s books about the magical British nanny. Once Travers finally agrees to travel from England to the Disney studios in Burbank, Richard Sherman (Jason Schwartzman) and his older sibling, Robert (B.J. Novak), seal the deal with their persuasive piano playing. “It’s not a performance,” says director John Lee Hancock of the Shermans’ attempt to win over Travers. “It’s a sales job.”

For the film to work, audiences will have to buy an actor’s ivory tickling, which is why Hancock brought in 85-year-old Richard (Robert died in 2012) as the film’s musical adviser and coach for Schwartzman. “It was like a master class the first time we met,” says Schwartzman, who spent hours practicing in Sherman’s Beverly Hills home. The actor and his mentor have since bonded better than Mowgli and Baloo. “We’d get lost in time, and we formed a strong friendship,” Sherman says. “Jason’s my doppelgänger.”

Disneyland and Other Parks Can Reopen in Stage 3, California Confirms