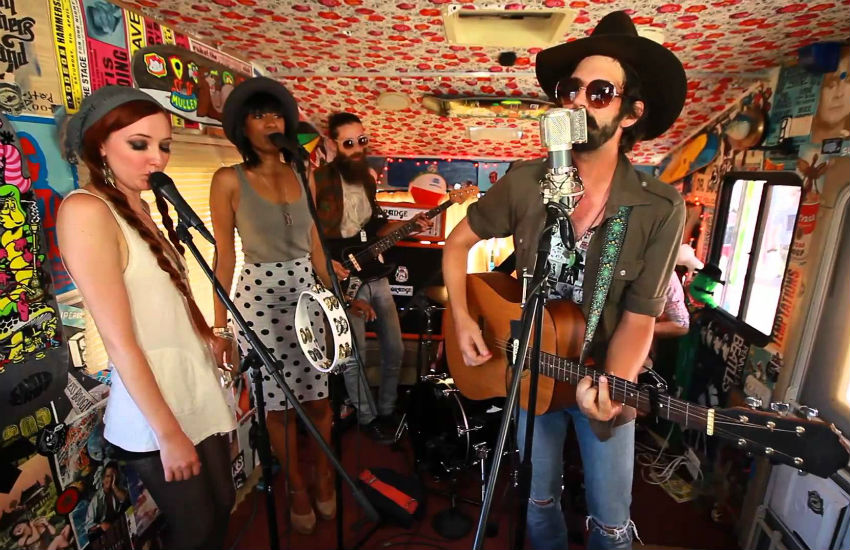 Ivory DeVille front man Johnny Elkins is a pretty laid back dude. Yesterday morning at 6:30 a.m. he got a call from his neighbor saying that someone had broken into his van. “They took three guitars and my drum kit,” guitarist and singer Elkins explains. He’s not super hung up on it, though. “I’ve been scrambling all day to find a kit I can borrow for tonight,” he says. Elkins also plays drums for Kat Meyers and the Buzzards. His attitude says a lot about his band, which has been climbing steadily on the indie rock and modern Americana scene since they first formed in 2013. There’s a carefree, take-things-as-they-come vibe to Ivory DeVille’s music, which has been described as honky-tonk rock ‘n’ roll and sounds like a crossbreed of early Rolling Stones and L.A.’s own ’60s revivalists The Brian Jonestown Massacre. “I’m never trying to make a statement. I just try to stick to the truth,” Elkins says, about his approach to his music. “It’s like what Hemingway said. Write what you know.”

Tonight, Ivory DeVille perform at the Echo alongside Jakcson Tanner for the second night of their shared January residency. Here’s everything you need to know about the band.

“We came together because of L.A.,” says Elkins, who moved to the city from Oklahoma in 2007. He met longtime collaborator and Ivory DeVille bassist Wolf Ramirez–a transplant from San Antonio–in L.A. through mutual friends and they’ve played together ever since.

Elkins always played music growing up in Oklahoma, but after a spending a good chunk of time abroad things didn’t seem the same. “I love Oklahoma,” he says, “but I felt like I was in a time warp when I came back. Home is never home again when you come back. It’s like you’re a ghost there.” He decided to try his luck in L.A. as he says.

The rest of the band consists of Ryan Wykert on drums and backing singers Laura Marion and Tia Simone. Ivory DeVille just released their self-titled debut album last December. “You can definitely feel the city in those songs,” says Elkins. “There’s a song on the album called ‘Valley Girl,’ which is about living in L.A.”

Most of the lyrics are written by Elkins. He likes to keep them observational and true to real life. “The song ‘El Paso’ is about playing a show there on our way to South by South West,” he says. “After our set the girls got roofied in the bar, so we stayed up all night making sure they didn’t get into trouble.” The following day the band was stopped at one of the infamous border checkpoints and the van was searched. “Tia and Laura finally wake up around then and the first thing they see is van full of cops,” Elkins laughs. Apparently, the checkpoint in question is the same one country legend Willie Nelson was busted at.

Ivory DeVille’s album release party in December at Sassafras Saloon in Hollywood is one of the best shows the band has played. “We played on a balcony. I was suspicious of it because of the barrier between stage and audience, but it was really cool,” Elkins muses. “The only thing people gripe about is the fact that we don’t have any merchandise for sale yet.”

Looking ahead, Ivory DeVille are trying to get a tour of Northern California organized this year. “We’re also playing South by South West again,” Elkins says. But it’s hard to be a touring band and a full-time musician with a full-time job. “Tia and Lauren both sing for living, which is cool, but the rest of us still work for the man,” Elkins laughs. “I can’t believe we haven’t been fired yet.”