Home Uncategorized Meet the Angelenos Who Protested the President at the “Trump Not Welcome... 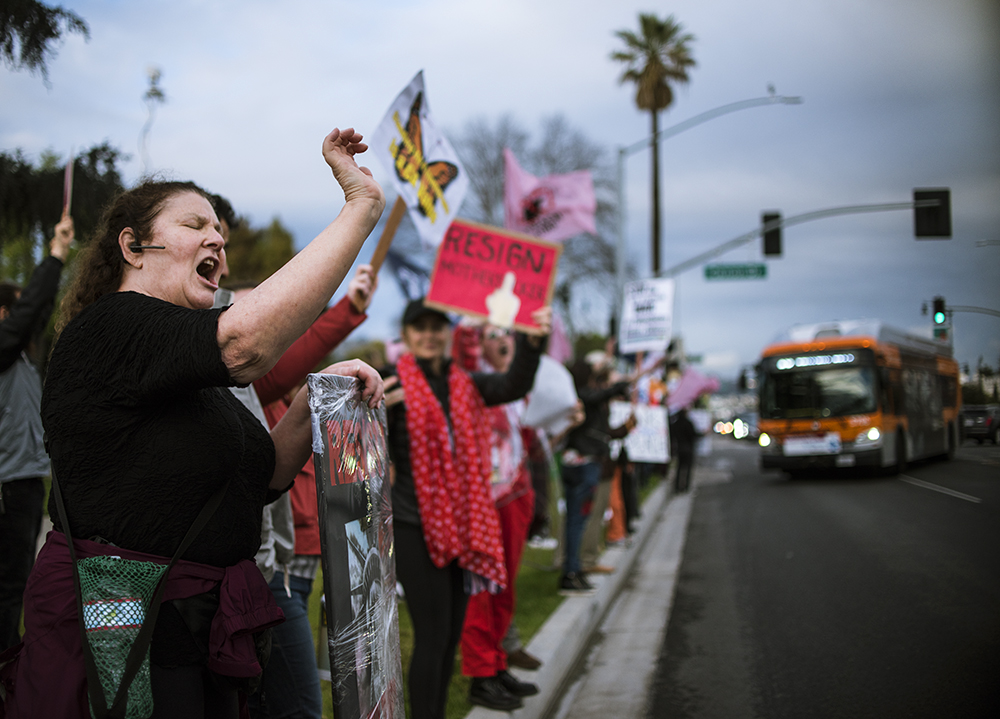 Demonstrators gathered in peaceful protests across the city on Tuesday night as President Trump visited Los Angeles for the first time since taking office. While explicit details of the president’s visit were shrouded in secrecy, organizers from various activist groups quickly coordinated three separate rallies and protests to target Trump’s expected route. The first demonstration was held at the Santa Monica Airport where Trump’s Marine One landed at 3:53 PM, followed by a “Trump Not Welcome in L.A.” rally in Beverly Gardens Park that took place from 5 to 8 p.m., and a last-minute protest was organized outside of the InterContinental Los Angeles Downtown Hotel where Trump stayed the night.

The demonstration in Beverly Hills transformed the usually quiet park to an almost festival-like display of activism, with live bands and street vendors lining the perimeter of the park as people chanted and marched down the block. Angelenos from all over the city—from Venice to the San Fernando Valley to Little Armenia—flocked to the area, many saying it was their first time visiting the neighborhood, in order to voice their anger and concern over Trump’s actions as president. From fears of a fascist regime to pleas for environmental issues to be taken seriously, a handful of protestors told us their concerns and reasons for protesting. “I’m here because Trump is a fascist, and he is threatening to ethnically cleanse this country. I’m with the Revolution Club and we’re building a movement for revolution, but principally in order to do that, we need to drive out this regime from power, and that’s going to take millions of people in the streets every day. There is direct line between the Confederacy of the Civil War and what we’re facing today. There is a real need for people from all different perspectives—whether you’re a communist, an anarchist, a democrat, whoever you are, if you care about the fate of humanity—to be in the streets every day.”

“I came as a part of Refuse Fascism and we’re here to drive out the Trump-Pence regime. We’re organizing tens of thousands—ideally millions—of people across the country to join in a large non-violent protest. The biggest thing we can do is educate people on the issues and organize. We have an analysis that this is a fascist regime and we’re refusing to let it consolidate.”

“I’m a part of International Action Center, and I’m a Vietnam-era Veteran, and I’m against wars. I see the inhumanity in these aggressive acts of war. I look at the damage done in Afghanistan, Libya, Iraq, Syria…and of course Mr. Trump is now threatening to go to war with a number of other countries. It’s a degree of insanity. Nothing is accomplished. They say they’re going to alleviate the world of terrorism, and what they’re actually doing is creating more hostility.”

“I came to beverly Hills because we do not need a white supremacist in the White House. He’s destroying people’s lives. People are being deported illegally. He is a bigot, and he is destroying our civil liberties in this country. If we don’t get off the sofa and into the streets, nobody’s to blame but ourselves. We need to get out and vote the Republicans out of office.”

“I’m Native American Indian, and if I could just say one thing to Donald Trump it would be to protect the only thing that we have: our earth and what’s left of it. We have to protect it all costs.  If he starts digging for oil and destroys the environment, it’s not just going to affect our families and our future generations, it’s going to affect his future generations as well. I just want him to wake up and realize that there’s only one earth.”

RELATED: Jeff Sessions Spoke in Sacramento and State Leaders Have a Lot to Say About It