Home Art There Is a Very Good Reason to Start Paying Attention to Flyers... 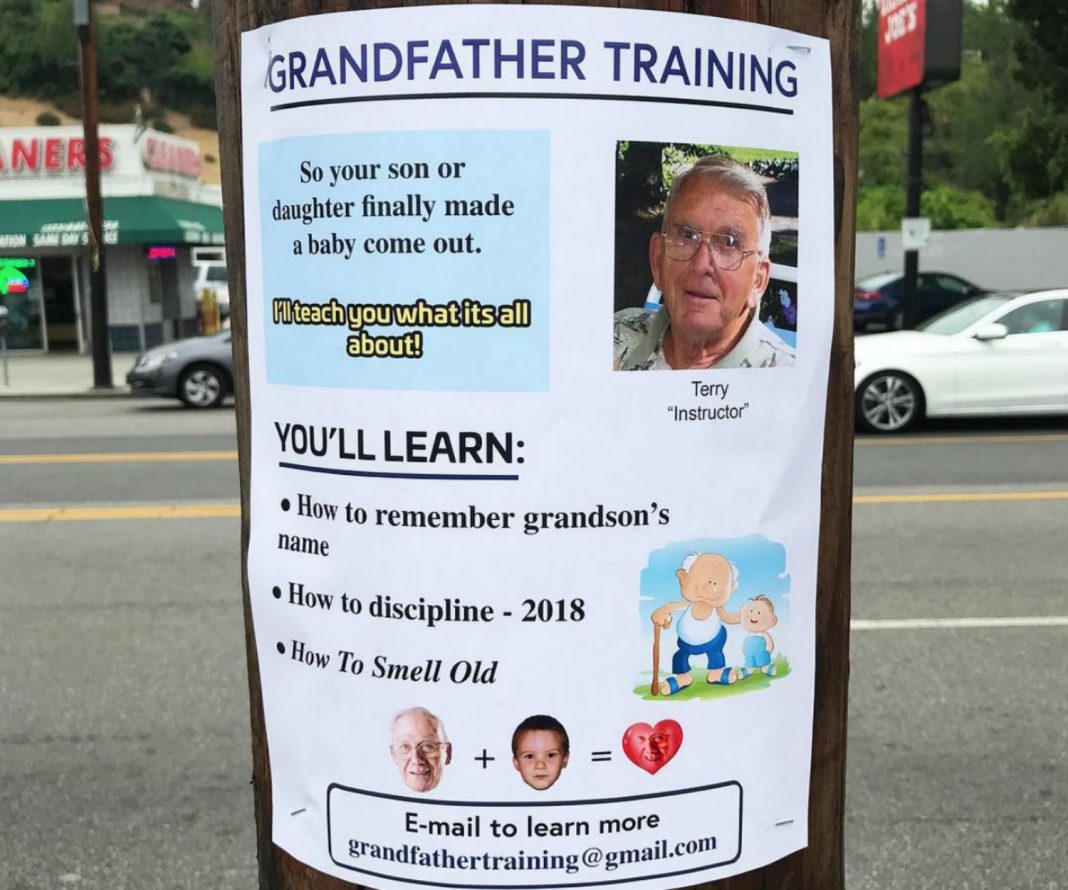 According to an advertisement stapled to electrical poles in a handful of L.A. neighborhoods, a white-haired lady in a soiled nightgown wants you to bathe in her milk. The offer’s only open to men, but once that qualification has been met, options abound: soy, almond, or “traditional”? Use her sponge or forgo her sponge? Interested parties are encouraged to visit batheinmymilk.com, where they’ll find several more grainy photos of shirtless men submerged in a milky liquid in a horror-movie filthy bathroom; for some nefarious reason there’s a length of rope lying on the floor.

The breadcrumb trail ends with hyperlinked text at the bottom of the page—”please email me right away”—that leads to the Facebook page of Alan Wagner, an L.A.-based comedian who, along with creative partner Sydney Marquez, has turned absurdist, real-life memes into an art form. And an actual business.

Wagner’s Instagram @truewagner, is a treasure trove of past projects, executed in a style that fans of Tim and Eric, Nathan for You, and Clickhole will appreciate. There’s a flyer that advertises the opportunity to “experience Cornelius,” either by seeing ($15), touching (reduced to $18 from $20), or tasting ($25) him. The website experiencecornelius.com features additional info (“Cornelius does not claim to be a healer, faith guru, or wonder-priest…”) and a video of people “experiencing” him in the ways listed. Visitors to the site can even fill out a form to request that Cornelius visit their hometowns. A knee psychic advertises they she can tell your future (i.e. whether or not you’ll die in a minivan accident) if you just text a photo of your knee to the number on the flyer. And a nude man lying on his sofa covered in unopened envelopes advertises that you can come to the (real) Silver Lake address listed and watch him open his mail.

Wagner—who formerly worked in video at Super Deluxe—refers to these egregiously well-executed jokes as “interactive comedic experiences” (although it hadn’t occurred to him to call them anything until I asked). Most of Wagner and Marquez’s projects have some interactive element, like the bumper sticker campaign that directs people to voteonourson.com, where they can see said son’s drawing of a bald man being hit in the head with a rock, and then vote on whether he’s good enough to go to art school. Since March, over 10,000 people have voted; 80 percent of them think “the son” has art-school chops.

“We like when people have to question whether or not it’s real,” Marquez says. “The more layers you add, the more they’re questioning whether it’s real or not.”

Wagner says that they’ve tried to “up the ante” in terms of how interactive the projects will be. Initially when they needed a phone number to add to a flyer, they’d pick a random Denny’s. Now they use Google Voice to set up unique numbers with messages that correspond to the campaigns. “One [flyer] went viral, and Denny’s actually called us and said, ‘We’re getting too many prank calls—can you take it down?'” If he remembers correctly, it was an advertisement for man and woman lessons taught by a muscle-bound husband-wife duo.

Since their work started going viral, Wagner and Marquez’s Brambus Productions has been tapped to work on campaigns for brands including Soylent and Atlantic Records, as well as some local bands. They were recently picked up by a talent agent after they inadvertently posted a flyer outside her house, and are currently working on ideas for a television show.

In real life, they both want to continue to push the boundaries of the comedy they create. “We’re trying to deepen the interactive experience,” Wagner says. “What we’d love to do is build it out to the point that there’s a physical space for an experience.”

Marquez adds, “That’s the next thing in the meme world we want to do. People are interested in these situations—and they love taking pictures to post on Instagram.”

In the meantime, they tend to focus their flyer distribution in neighborhoods with a lot of foot traffic, and they both live in Silver Lake, so the area around the Reservoir is usually a safe bet. Keep your eyes peeled.

RELATED: At This Compliment Battle, Comedians Kill Each Other With Kindness