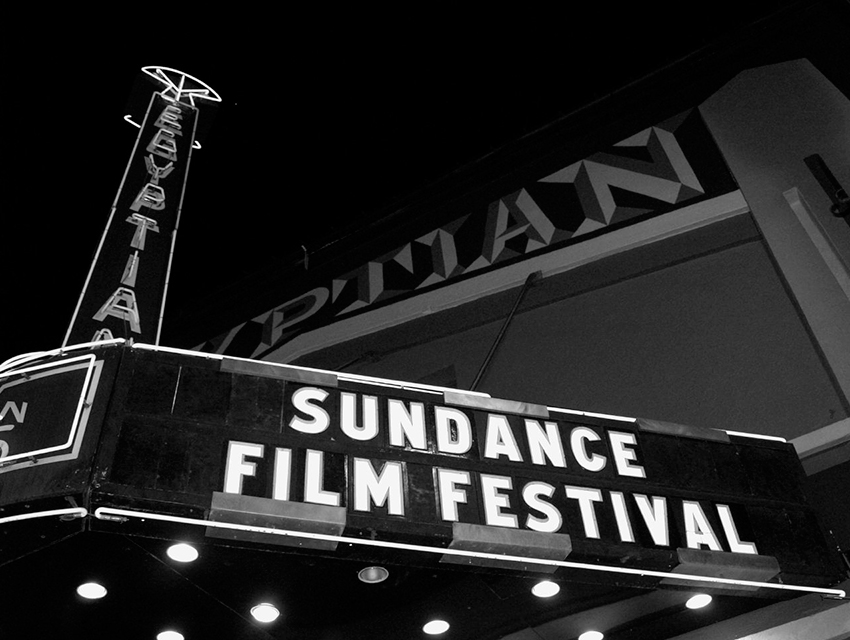 Every January, the Sundance Film Festival attracts approximately 50,000 entertainment industry bigwigs, celebrities, volunteers, movie buffs, and hob nobbers to the tiny mountain town of Park City, Utah. For non-VIPs, festival pass-holders, or pre-sale ticket buyers, the festival experience is largely defined by the scramble for waitlist tickets to the 120-plus films. Two hours before screening time, patrons without tickets can request a waitlist number through the Sundance eWaitlist app. Tickets are $20 and cash only. A waitlist number does not guarantee entry; neither does showing up at the venue the requisite 30 minutes early (though arriving just one minute late forfeits your designated number, forcing you to wait at the back of the line for a near miracle).

This ticket frenzy dominates conversation among travel companions and strangers, charts the journey between venues on the various free shuttles, and dictates a festivalgoer’s free time. I should know—I experienced my own hits and misses at gaining entry to films during the festival’s first weekend. Here’s what I learned: The e-waitlist is not for the impatient or lazy. You’ll need to brave the cold, be willing to stand for long periods, be scolded by no-nonsense volunteers, be turned away, and have to re-strategize time and time again.

Maybe it’s the psychology of playing-the-odds, but after taking a seat in a theatre for which you e-waitlisted, you’ll feel like you somehow beat the system, even though you really just learned the system. But here’s the thing: the system works. And if you like movies, it’s worth it.

Behold, a timeline of my successes and misfortunes:

Friday, January 22
MISS: Morris from America, 12:00 p.m.
At 10:00 a.m., my friends and I simultaneously hit the “join this waitlist” button on our phones, and received waitlist numbers 317, 326 and 327. We arrived at The Eccles Center three minutes late, at 11:33am, and had to join the back of line. At 12:00, the first ten people in line were admitted. At 12:03, the remaining crowd was informed that the theatre was full. Dejected, we trudged out to the shuttle and rode to Main Street, where we warmed up at the Chase Sapphire Lounge, enjoying some free appetizers and coffee, and buried our heads in our phones to plan our next attempt.

HIT: The Bad Kids, 3:30 p.m.
At 1:30 p.m., as we tried to join the waitlist for The Bad Kids, my e-waitlist account logged me out, and I failed to get a number. My friends received 96 and 146. We met a woman at the lounge named Nora who’d received 135. We arrived at The Temple Theatre just before 3:00 p.m., and my friends queued up in line according to their numbers while I waved at them from the end of the line. A few minutes later, Nora jumped out to use the restroom, and the volunteer at the entrance wouldn’t let her back in (leave the line for any reason and you forfeit your place). At 3:30, the volunteers began letting in waitlisters in groups of twenty, eventually admitting us all. Nora had given up on the waitlist out of frustration after the bathroom fiasco, but just before the theatre doors closed, she asked a volunteer if there was room for one more, and received a miraculous yes. We were all in! Seated together in the back of the theatre, we high-fived like winners of a game called SUNCHANCE.

HIT: Miles Ahead, 8:00 p.m.
At 5:55 p.m., over beers at Squatters Ale House, we placed our iPhones on the table and synched up our e-waitlist accounts. “Time to focus,” Angie said. I took a few deep breaths. Rachel said, “Let’s find our Zen,” and we counted down for the join button to appear on our screens. I received number 14, Rachel 160, but Angie got logged out of her account and couldn’t get a number. No matter, because after boarding the wrong shuttle, we arrived at the venue five minutes late and were all forced to join the back of the line. But, luck was with us, and the entire waitlist line was admitted.

Saturday, January 23
MISS: Captain Fantastic, 6:30 p.m.
After a day of party hopping, Rachel and I decided on one movie: the much buzzed-about Captain Fantastic starring Viggo Mortenson. However, with a bad connection at the CNN Films Lounge, our apps didn’t connect us with waitlist numbers. We decided to take our chances and hopped a shuttle for The Marc theatre, arriving just before 6:00 p.m., to find that the screening was actually at The Eccles. We schlepped nearly a mile through the dark, snowy night to the back of the line at The Eccles, where all waitlisters were turned away.

Sunday, January 24
MISS: The Eagle Huntress, 11:30 a.m.
At 9:30 a.m., Rachel and I got waitlist numbers 43 and 44 for The Eagle Huntress. We arrived 45 minutes early, hungover, hungry, and under-caffeinated. We gazed, forlornly, upon the cafe across the hall, for the volunteer wouldn’t let us jump out of line to get anything. At 11:32 a.m., we were informed that the theatre was full and no waitlisters would be admitted, and had I been a child with no control over my emotions, I would have cried. Future dancers of the sun beware: e-waitlisting in the morning is not the way to start a day.

MISS: Life, Animated, 3:00 p.m.
While we refeuled at our condo, Rachel and I joined the waitlist for Life, Animated, receiving numbers 41 and 42. Again, we arrived forty-five minutes early, and again, the theatre filled entirely with ticket-holders. A woman behind us in line threw her arms up and declared she was done waitlisting. “If I can’t get a legitimate ticket, I just won’t see any movies,” she said.

HIT: Wild, 5:30 p.m.
We received numbers 32 and 33 for Wild at The Eygyptian Theatre. We arrived just before 5:00 p.m., and shivered in the underground parking-lot waiting area until all waitlisters were admitted. Huzzah!

HIT: The Lure, 8:30 p.m.
While in the screening of Wild, we hid our phones under our coats and joined the waitlist for The Lure, showing at the same theatre a few hours later. Receiving numbers 24 and 25, we were all let in. Afterwards, we were so excited about having seen this surreal, magical movie that all previous e-waitlist woes seemed to melt away. Films like this make the whole experience — frozen toes, chattering teeth, missed shuttles, caffeine-headaches—worthwhile.

Monday, January 26
HIT/MISS: Holy Hell, 12:00 p.m.
With numbers 49 and 50, Rachel and I arrived at the Temple Theatre at 11:25 a.m. We’d driven there thinking there would be public parking as the venue was off a highway. Of course, we were wrong. Parking was for permit-holders only. I dropped Rachel off, found neighborhood parking across the street, and dashed into the theatre at 11:55 p.m., hopping into the back of the line. Rachel got in; I didn’t. If they’d just let me park my car in the nearly empty lot (does anyone even buy any of those Sundance parking permits?), I would’ve made it in. Or, if we’d arrived fifteen minutes earlier, I would have made it in. Lesson for the future: always give yourself more time than you think you’ll need.

Tuesday, January 27
HIT: Life, Animated, 6:30 p.m.
Before Rachel’s late flight out of Salt Lake City, we had just enough time to catch another movie. With numbers 14 and 15, we arrived at the Rose Wagner Performing Arts Theatre five minutes late, but all were admitted. The last patrons in the theatre, we lucked out with two seats dead-center, the kind of e-waitlisters luck that makes you feel like the Sundance Gods smile upon you.