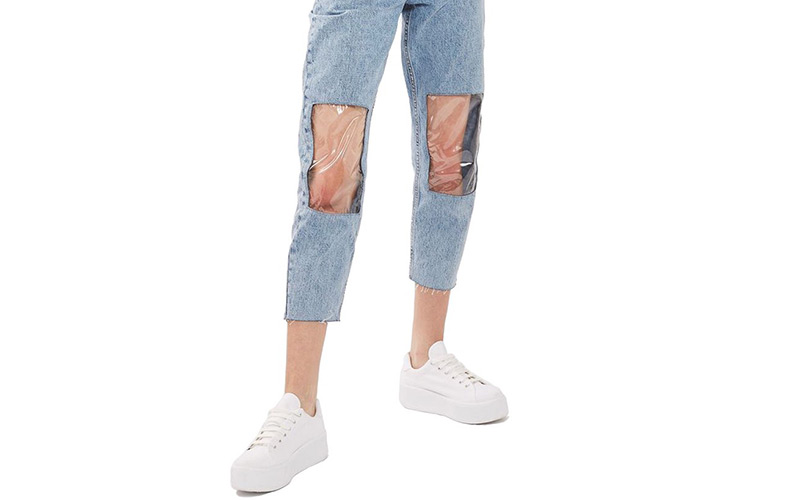 In the first half of the 20th century, a woman who lifted her long skirts to reveal bare ankles was considered promiscuous. Who knows what the genteel folks of that era would have made of Topshop’s new “Mom Jeans,” which are not only cropped but have “slick plastic panels” over each knee.

The $95 pants, which are 30 percent too expensive for clothing that is missing 30 percent of its fabric, showed up on Nordstrom’s website today. Considering this is the same retailer who sold out of an $85 rock ensconced in a leather pouch, getting people to buy these probably doesn’t seem like much of a stretch. And while everything about them raises questions—What, exactly, makes these jeans specific to moms, and who thought them an improvement on classic mom jeans? If it’s really hot out and your legs start to sweat, would the knee-windows betray you by fogging with condensation? Would it make the wearer weirder or cooler if they drew tiny faces on each of their knees in an effort to make a hazmat suit joke?—they aren’t nearly as horrifying as Urban Outfitters’ “extreme crop tank top shrug,” a “tank” (it has straps, I guess) so tiny that it doesn’t even deign to cover the model’s bra.

Seems like the fashion industry has a case of the Regina Georges. The question is, are we going to be its sheeple?

WeHo Is Getting the World’s First Nordstrom Local, and It Looks Kind of Genius