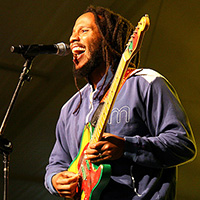 If Coachella isn’t on your itinerary, here are this week’s must-see L.A. shows.

TUESDAY: Putting aside the obvious comparisons to his legendary father, Ziggy Marley has carved out an eclectic career of his own whether that means putting out an album full of children’s music or doing voiceover work on an animated films. On April 15, Marley will release his latest album Fly Rasta, a collection of songs that he hopes will move his beyond the reggae genre.
Club Nokia: 800 W. Olympic Blvd., downtown. Tix: $36.

Punk super group Off! will play a free set at Amoeba in celebration of their third album, Wasted Years, which comes out today. Featuring members of Black Flag (singer Keith Morris), Burning Bride (guitarist Dimitri Coats), Redd Kross (bassist Steve McDonald), and Rocket From the Crypt (drummer Mario Rubalcaba), the band is known for kicking out the jams in under 30 minutes, recalling a time when punk anthems were short, fast, and to the point.
Amoeba: 6400 Sunset Blvd., Hollywood. Tix: Free.

FRIDAY: Before they head to Coachella, heavy duty rockers Motörhead will play a warm-up gig. The godfathers of modern heavy metal (along with Black Sabbath) have influenced everyone from Ice-T to Metallica.
Club Nokia: 800 W. Olympic Blvd., downtown. Tix: $40.

We highly recommend catching Jungle Fire, an L.A.-based 12-piece that blends Afrobeat, funk, ska, and Latin influences while bringing the party to the dance floor. Members of the ensemble have recorded, toured, and played with an impressive roster of soul, funk, and world musicians like Quantic, Stevie Wonder, and Ethio Cali. DJ Rich Medina will also play a two-hour set.
The Echo: 1822 Sunset Blvd., Echo Park. Tix: $12.

SATURDAY: Karsh Kale is an Indian composer and producer who’s best known for fusing traditional Indian music with ambient pop beats. An original member of Tabla Beat Science, Karsh has had his work featured in Bollywood film compositions as well as on American shows like True Blood. When we caught his set at the Hollywood Bowl in 2007, he whipped the crowd into a frenzy.
Luckman Fine Arts Complex: 5151 State University Dr., Los Angeles. Tix: $20.