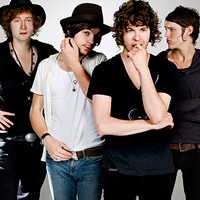 This week’s must-see L.A. shows include a heavy metal mariachi band, a rock ‘n roll circus, and free set by some hometown heroes

MONDAY: Brighton-based Britpop band The Kooks will play two sets tonight, the first at 7:30 p.m. and a later one at 11 p.m. Since forming in 2004, the band has channeled the sounds of the 1960s British Invasion. The members had only been together four months before to Virgin Records signed them. Though they’ve garnered plenty of critical acclaim and played plenty of festivals, they’ve never quite cracked the American music scene.
The Troubadour: 9081 Santa Monica Blvd., West Hollywood. Tix: $30.

TUESDAY: Hometown heroes Ozomatli will play a free gig to in support their newest album, out tomorrow, 3 Place In the Sun. The record is a blend of garage rock, electro cumbia, and polyrhythmic sounds featuring a collaboration with Dave Stewart of Eurythmics. Known as L.A.’s unofficial party band since 1998, they’ll transformed Amoeba into a rocking scene. After performing, the band will sign copies of the album for anyone who buys it in the store.
Amoeba Records: 6400 Sunset Blvd., Hollywood. Tix: Free.

THURSDAY: What would happen if you married a mariachi band with heavy metal? You’d get Metalachi, a band that mashes up the two genres for a highly entertaining show based partly on outfits and attitude. Musically, it’s a nice surprise to hear some classic headbanging tunes recast with raucous mariachi rhythyms.
La Cita: 336 S. Hill St. DTLA. Tix: $12.

FRIDAY: This is more than your typical rock concert. Billed as Vavoom: A Rock & Roll Circus, this is an evening of theatrics, burlesque, rock and roll, and more. A collaborative effort between self-proclaimed ringmaster Dave Stewart and Lucha VaVOOM cofounder Rita D’Albert, it should provide treats for all the senses.
El Rey Theatre: 5515 Wilshire Blvd., Miracle Mile. Tix: $28.

SATURDAY: To celebrate its 40th anniversary, the Kronos Quartet, the band will be joined by Laurie Anderson to perform Landfall, collaborative experience that includes spoken word, visuals, music, and text. This particular piece was written by specifically for the Quartet by Anderson.
Royce Hall at UCLA: 340 Royce Dr., Westwood. Tix: $24-68.