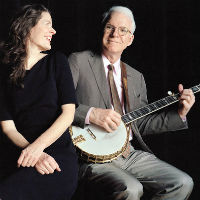 This week’s must-see L.A. shows include the godfather of goth, a comedian-turned-banjo-picker, and a free, super funky 4th of July block party.

WEDNESDAY
Widely known as a comedian and actor, Steve Martin is also an accomplished banjo player who will perform with his band, the Steep Canyon Rangers. He recently paired with singer Edie Brickell to release Love Has Come for You, an album of material that showcases their love for classic bluegrass music. This evening will also include a fireworks show to get you warmed up for the 4th of July.
Hollywood Bowl: 2301 N. Highland Ave., Hollywood. Tix: $13-250.

THURSDAY
Goth godfather Peter Murphy recently released Lion, his tenth studio album of original material, and although its has all the markings of classic Murphy material, the recording of the album was a rushed and improvised experience, one that had the singer questioning if he could keep up with performing the album’s highest notes in a live setting. Should be interesting to find out what he has come up with. At the very least expect some Bauhaus gems. Ringo Deathstarr supports this date.
El Rey Theatre: 5515 Wilshire Blvd., Miracle Mile. Tix: $25-$100.

Formed by the Hackney brothers in 1971, Death was a Detroit band that would pioneer the punk sound and become the first black band to define the genre. The group’s story was told in the 2013 documentary A Band Called Death, which chronicles how the discovery of the group’s demo tape rekindled enough interest in the band for it to reunite and tour.
The Roxy: 9009 W. Sunset Blvd, West Hollywood. Tix: $22.

FRIDAY
Celebrate the 4th of July at Grand Park’s Block Party, which includes a free firework display and concert featuring electro rock duo Phantogram and glam rockers Semi Precious Weapons. Although there will be plenty of food vendors on site, alcohol will not be sold or permitted on the premises. The party starts at 4 p.m. and fireworks begin at 9 p.m.
Grand Park: 200 N. Grand Ave., downtown. Tix: FREE.

SATURDAY
Grand Performances can be counted on to book a stellar lineup for its free summer concert series. This show is being touted as a Stones Throw Picnic in honor of the highly regarded local record label that’s celebrating its 10th anniversary. The day will include performances from vocalist and producer Dam Funk, local reggae group The Lions, rapper Madlib, and a DJ set by Peanut Butter Wolf (who will hopefully pull from his awesome record collection), along with unannounced special guests. Pre-show activities including a judged breakdancing contest and an on-site Beat Swap Meet (the ultimate swapportunity for vinyl lovers) begin at 5 p.m.
Grand Performances: 350 S. Grand Ave., downtown. Tix: FREE.