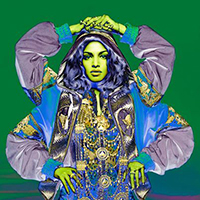 This week’s must-see L.A. shows include a pop provocateur from across the Atlantic, a revived group of ’90s alt-rock queens, and a performer at the peak of a career he thought was long dead.

WEDNESDAY: The Take Off and Landing of Everything gave British rock band Elbow its first number #1 hit in the UK though it’s the quintet’s sixth album. The group formed while its members were in their teens; now that they’re in their 40s they’re hitting the mark with a consistent formula, producing albums that continue to earn them critical acclaim.
The Wiltern: 3790 Wilshire Blvd., Koreatown. Tix: $25-$45.

THURSDAY: It is hard to pin down M.I.A. (née Maya Arulpragasam), the Sri Lankan-British performer who merges sophisticated beats with a bold public persona and messages about social injustice. Her fourth release, Matangi, came out last year and stayed true to that vision. Before seguing into music, Arulpragasam was an art student, so when you see her live you can expect a visually stimulating performance that marries perfectly with her music.
Shrine Expo Hall: 665 W. Jefferson Blvd., South LA. Tix: $45.

FRIDAY: The first band to be signed to the Beastie Boys’ record label, Grand Royal, ’90s alt rockers Luscious Jackson have reunited to play a handful of shows. The two acts share a kinship; before she joined the ladies of Luscious Kate Schellenbach was the Beastie’s original drummer. The band was riding high in the ’90s: They had a song on the Clueless soundtrack (“Here’), toured with Cypress Hill, and starred in a popular Gap ad. But in 2000 they disbanded. The band’s two most recent albums, Magic Hour, and an album of children’s music, Baby DJ, came out in November of 2013.
El Rey Theatre: 5515 Wilshire Blvd., Miracle Mile. Tix: $30.

SATURDAY: In the wake of the 2012 Academy Award-winning documentary Searching for Sugarman, Sixto Rodriguez has seen his career skyrocket after decades of obscurity. Unbeknownst to the Detroit performer, he had developed a massive cult following in South Africa, where he outshined Elvis Presley in popularity during the ’70s.
Luckman Fine Arts Complex: 5151 State University Dr., East LA. Tix: $65-$75.

SUNDAY: The scope of Pharrell Williams’s success is unparalleled. He has worked as a producer and collaborator with the many of the music industry’s biggest names. Then there are his hits as a solo producer. He has a way of pairing a melody with a hook that instantly captivated listeners. He collaborated with Daft Punk and Robin Thicke on two of last summer’s biggest earworms (“Get Lucky” and “Blurred Lines”) and his tune “Happy,” off the Despicable Me soundtrack, is still a monster hit. In March, he released Girl, his first album since 2006. Expect to hear renditions of many of the songs to which he has lent his magic touch. Bruno Mars headlines.
Hollywood Bowl: 2301 N. Highland Ave., Hollywood. Tix: $50-$170.