Home Music Top Tickets: Peaches, Magic Wands, Breakestra, and Thao & The Get Down,... 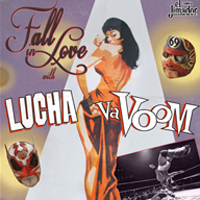 This week’s must-see L.A. shows include a veteran electroclash rocker as the warm-up to an evening of Mexican wrestling, a free Valentine’s Day show in Grand Park, and a troupe of Silver Lake “lovewave” rockers.

TUESDAY: On the heels of their yet to be titled new album that comes out later this month, The Magic Wands will play a free show at Harvard & Stone. The duo originally connected via Myspace and have recorded everywhere from Nashville to Silver Lake, where they’re now based. Along with a full-fledged band they’re producing self-described genre “lovewave” music with overtones of psychedelia, electronica, rock, and pop.
Harvard & Stone: 5221 Hollywood Blvd., Hollywood. Tix: Free.

WEDNESDAY & THURSDAY: If there’s one quintessential Los Angeles event, it’s Lucha VaVOOM, an evening of masked Mexican wrestlers, burlesque dancers, and comedians. (Check out our slide show of Lucha VaVOOM through the years.)Even more reason to come out for this week’s show is a special live appearance by electroclash rocker Peaches, who will play a set before the luchadors take the stage. Keep your eyes peeled for our personal faves: aerialist Karis and wrestlers Cassandro and The Crazy Chickens.
Mayan Theater: 1038 S. Hill St., DTLA. Tix: $35.

SATURDAY: R&B star Charlie Wilson, a founding member of ’80s funk supergroup The Gap Band, has managed to keep the funk alive while maintaining a contemporary soul sound that still gets audiences dancing. He shares the bill with New Jack Swing originator Keith Sweat. The Make It Last Forever singer is sure to pull out all the stops for his catalog of hits like “I Want Her,” “Nobody,” and “Twisted.”
Club Nokia: 777 Chick Hearn Ct., DTLA Tix: $45-99.

Formed in 2003, Thao & The Get Down have been impressing audiences with melodic alternative rock that has lead to tour stints with the likes of Neko Case, Rilo Kiley, and Xiu Xiu. The band’s last full-length release was 2013’s We The Common, which landed them slots on the music festival circuit and helping build a wider audience. A new EP, The Feeling Kind, came out in November and features covers of Melanie, Yo La Tengo, and The Troggs.
El Rey Theater: 5515 Wilshire Blvd., Miracle Mile. Tix: $20-35.