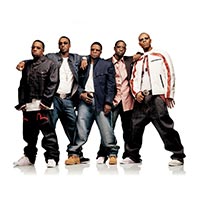 This week’s must-see L.A. shows include a Syrian wedding singer, a British rock band from the ’80s, and smooth R&B crooners

THURSDAY
Syrian wedding singer Omar Souleyman is best known for his live recordings, most of which are pirated or only available on compilations. It wasn’t until last year that his first official album, Wenu Wenu, was released. Souleyman has collaborated with artists like Bjork and attracted a fleet of new followers with his late-night sets on the festival circuit, where he blends electronic music with Arabic and Kurdish vocals. If you aren’t able to make it out to the pier, you can catch him at Discostan on Sunday at The Echo.
Santa Monica Pier: Ocean Ave. at Colorado Ave., Santa Monica. 7 p.m. Tix: Free on Thursday; $17 on Sunday.

FRIDAY
British New Wave band Echo & The Bunnymen has been putting out records for more then 35 years. Meteorites, released last month, is the band’s 12th studio album and features only two members of the original lineup: singer Ian McCullough and guitar player Will Sergeant. The new tracks stay true to the rock music that longtime fans expect, but this is a band that may never eclipse its ‘80s hits, “The Killing Moon” and “Lips Like Sugar.”
Orpheum Theatre: 842 S. Broadway, downtown. Tix: $40.

SUNDAY
If the Beyoncé and Jay-Z show is too much spectacle and drama (Are they divorcing? Are they crazy in love? Is it all a sham?), then head to an outdoor performance by New Edition featuring all six members of the group. Bobby Brown, Johnny Gill, Ricky Bell, Ronnie DeVoe, Michael Bivins, and Ralph Tresvant were barely teenagers when they formed in 1978, and created the hits “Mr. Telephone Man,” “Candy Girl,” and “Cool It Now.” The audience can expect to hear those hits as well as tunes from each member’s solo career. R&B crooner Joe is supporting.
Nokia Theatre: 777 Chick Hearn Ct., downtown. Tix: $60-$150.