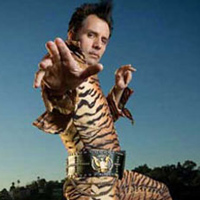 This week’s must-see L.A. shows include the Mexican Elvis, Vallenato-style cumbias, and a tribute to an elusive Nigerian funk musician.

MONDAY: Why not spend Cinco de Mayo with El Vez, the Mexican Elvis? Robert Lopez has been performing the King’s greatest hits with tongue-in-cheek Latin-tinged lyrics that touch on social justice issues. Tonight’s show is being billed as Punky Cinco Party, a way for Lopez to show a punkier side of his El Vez character.
The Echo: 1822 W. Sunset Blvd., Echo Park. Tix: $14.

If want to put on your dancing shoes for Cinco, there’s no better option than Very Be Careful. The Los Angeles band is known for Vallenato-style cumbias that pack the dance floor and get people grooving. If you’re too shy to dance, you can choose from 20 classic arcade games to partake in.
Blipsy’s Barcade: 369 N. Western Ave., Koreatown. Tix: $10 at the door.

TUESDAY: Los Angeles based singer songwriter Jenny Lewis started her career as a child actress, then formed her own band, Rilo Kiley, and was recently tapped by Girls creator Lena Dunham to produce Completely Not Me, a single released for the third season of the popular HBO series. This summer Lewis will be playing the festival circuit, but before she heads out she’s playing some intimate shows here in town. This show promises a “magical” guest appearance.
The Roxy: 9009 Sunset Blvd., West Hollywood. Tix: $30.

THURSDAY: The question: Who is William Onyeabor? The answer: an elusive Nigerian funk musician who released an impressive collection of work during the late-’70s and mid-’80s that was Nigeria’s answer to synch pop and New Wave. Rumors surround the musician but one fact remains: He wants nothing to do with his musical past. That hasn’t stopped a group of musical luminaries from putting together a short tour to pay tribute to the man. Expect David Byrne, Kele Okereke of Bloc Party, Money Mark, Joshua Redman, Alexis Taylor of Hot Chip, and Paul Mahoney of LCD Soundsystem to perform selections from his work.
The Greek Theatre: 2700 N. Vermont Ave., Los Feliz. Tix: $40-70.

SATURDAY: Morrissey returns to the city that loves him more than any other with new material that is set for a July album, World Peace is None of Your Business. Although his newer releases haven’t been too thrilling, you can count on Morrissey to play selections from his impressive solo repertoire as well as classic Smiths tunes. Show up early to catch Tom Jones open.
LA Sports Arena: 3939 S. Figueroa Ave., downtown. Tix: $40-100.