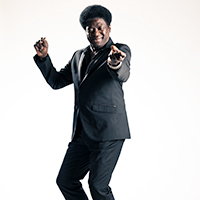 FRIDAY
The real miracle of soul legend Smokey Robinson is just how well his silky voice still carries. Credited with writing and producing more than 30 Top 40 Hits for Motown, he stayed loyal to the label until in 1990. At 74 years old, he continues to perform with no shortage of material to choose from.
Casino Morongo: 49500 Seminole Dr., Cabazon. Tix: $70-$90.

Los Angeles-based jazz ensemble Ethio Cali will perform selections from the magnificent Ethiopiques, a CD series  that a Parisian record label has been releasing since 1998; it contains 28 volumes of tunes from the Golden Age of Ethiopian jazz, which ran from the 1960s to the ’70s. The group will play two sets, both featuring the music of well-known Ethiopian artists such as Mulatu Astatke and Alemayehu Eshete, among others.
Blue Whale: 123 Astronaut E. S. Onizuka St., downtown. Tix: $15 at the door.

SATURDAY
Known as the Screaming Eagle of Soul,Charles Bradley is one of the most inspirational artists to hit stages in recent years. His life story was chronicled in the 2012 documentary Charles Bradley: Soul of America, which showcased the struggles and resilience of a man who came from the projects and has graced the pages of Rolling Stone. Bradley was performing as a James Brown impersonator when he was discovered by DapTone Records boss Gabriel Roth, and now he’s taking the spotlight under his own name.
Fonda Theatre: 6126 Hollywood Blvd., Hollywood. Tix: $22.50.

In recent years, former Fugee Lauryn Hill whose only solo studio album, The Miseducation of Lauryn Hill, earned a record-breaking five Grammys in 1998, has been hit-or-miss as far as her live performances go. The singer has been known to re-work her songs into lengthy unrecognizable diatribes, but the fact remains that Ms. Hill has a one-of-a-kind voice. It will be interesting to see what she has in store for her first L.A. appearance in two years.
Club Nokia: 800 W. Olympic Blvd., downtown. Tix: $60-$90.

After the recent announcement that he would be in residence at New York’s Madison Square Garden once a month, indefinitely, Billy Joel visits L.A. on his 21-date tour. The Piano Man still knows how to please his fans, consistently releasing music that engulfs listeners with a blend of soft rock, pop, and jazz.
Hollywood Bowl: 2301 N. Highland Ave., Hollywood. Tix: $50-$250.

SUNDAY
As part of Stub Hub’s Next Stage Concert Series, Swedish songstress Lykke Li will play her indie pop tunes at a benefit for Mr. Holland’s Opus, which strive to keep music education alive in schools, and Write Girl, which pairs at-risk teens with professional writers who serve as their mentors.
The Roxy: 9009 Sunset Blvd., West Hollywood. Tix: $60.