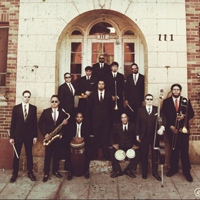 TUESDAY: Orgone is an eight-piece collective of Los Angeles musicians who have spent time as session players and share an appreciation for funk and soul bands like The Meters and War. At Grand Park’s new year’s celebration the octet played a fiery gig that was not-to-be-missed.
Amoeba Records: 6400 Sunset Blvd., Hollywood. Tix: Free.

WEDNESDAY: Fresh off a Grammy win for Best Latin Rock, Urban or Alternative Album for their full length studio album Treinta Dias, hometown heroes La Santa Cecilia (named after the patron saint of music) have embraced a hybrid sound that includes bossa nova, cumbia, boleros, and rancheras. The group recently released Someday New, so expect a selection of songs from the new album along with a Q&A.
The Grammy Museum: 800 W. Olympic Blvd., downtown. Tix: $20.

THURSDAY: It wouldn’t be quite right to say Gary Numan is experiencing a comeback, but he is in the middle of a creative renaissance. The electronic music innovator best known for his 1980s hit “Cars” now lives in Los Angeles and in October of last year released Splinter, an album that doesn’t shy away from his roots while putting a modern spin on his signature sound. Numan begins his North America tour this week; expect selections from the new album and reawakened versions of his classics.
The Mayan: 1030 S. Hill St., downtown. Tix: $47.

FRIDAY: If you miss the days of Fania Records, the famed New York salsa label that thrived in the late ’70s and early ’80s, then the Boogaloo Assassins are your band. With its mashup of boogaloo and Afro Caribbean jazz rhythms, the nine-piece outfit knows how to make a room come alive. This show includes a set by 27-year-old garage rock and R&B enthusiast Nick Waterhouse.
Hollywood Legion Hall: 2535 N. Highland Ave., Hollywood. Tix: $25 at the door.