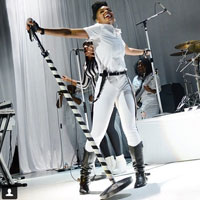 TUESDAY: One of the most underrated albums of 2013 was Janelle Monae’s The Electric Lady, which included collaborations with Prince, Erykah Badu, Miguel, Esperanza Spaulding, and Solange Knowles. Monae managed to sound old school yet very present. Tonight’s concert is a make-up date for a November gig she had to reschedule due to vocal strain. Monae puts on a show that takes fans on a futuristic funk trip.
House of Blues: 1530 S. Disneyland Dr., Anaheim. Tix: $27.50.

WEDNESDAY: Iconic L.A. punk band X, which played the Whisky a Go Go’s plenty of times in the early ’80s, returns for a show celebrating the Sunset Strip venue’s 50th anniversary. Formed in 1977, X was more than just another punk band; their sound was influenced by poetry and folk and included double harmonies that set them apart. The band is best known for two albums: Los Angeles (produced by Ray Manzarek of the Doors) and Wild Gift.
The Whisky a Go Go: 8901 Sunset Blvd., West Hollywood. Tix: $40.

THURSDAY: Touring with their self titled and fifth studio album, which came out on Tuesday, EDM duo the Crystal Method will make their first L.A. appearance in three years. The record was supposed to be released last year but was delayed by co-founder Scott Kirkland’s brain surgery to remove a cyst. That makes tonight’s show a celebration—and a groundbreaker for the band. For the first time, the duo will be backed by a full live band including guitarist Richard Fortus of Guns N’ Roses as well as guest vocalists from the new record, Dia Frampton and Franky Perez.
The El Rey: 5515 Wilshire Blvd., Mid-Wilshire. Tix: $25.

FRIDAY: To christen the Inglewood landmark The Forum, which reopens after a $70 million makeover, the Eagles will play six dates to perform History of The Eagles Live In Concert. The band plans to play their most memorable material or what’s become the soundtrack of the Baby Boomer generation. Considering all the turmoil the band has experienced through the years, it’s a miracle all the members have come together to perform on the same stage. (Never underestimate the motivational power of diminished royalties in the download era.) If you can manage a peek above the Forum, you’ll see that the roof appears to be an Eagles’ waxed LP.
The Forum: 3900 W. Manchester Blvd., Inglewood. Tix: $40 – $250.