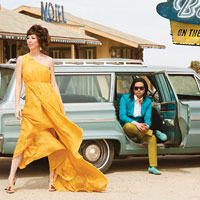 MONDAY: You may remember ’90s indie rock band Cibo Matto from their food-centric songs. The Japanese duo of Miho Hatori and Yuka Honda has been on a 14-year hiatus since releasing their second album, Stereo * Type A, but they returned to touring and recently put out their first full-length album since 1999. Hotel Valentine, which came out on February 14, stays true to their original sound with playful trip-hop and jazz samples.
El Rey: 5515 Wilshire Blvd., Miracle Mile. Tix: $25.

TUESDAY: Together since 2002, local dream pop favorites Silversun Pickups gained a following by playing local venues like Silverlake Lounge and Spaceland (now The Satellite). The band, which also starred in a Los Angeles magazine fashion spread, will play a special acoustic set for the release of The Singles Collection, a 7″ vinyl box set coming out on February 25. After the show, the members will sign copies of the box set as long as they were purchased at Amoeba.
Amoeba Records: 6400 Sunset Blvd., Hollywood. Tix: Free.

THURSDAY: Opening up for psychedelic folk rock band Dr. Dog is local up-and-comer Moses Sumney. The San Bernadino native has no official release for his first album but he has already gained attention from tastemakers like KCRW DJ Anne Litt and artists such as Thundercat and Beck, who have tapped Sumney to open for them on tour. What can you expect from Sumney? A blend of folk and soul accompanied by live looping of handclaps and vocals. If you don’t catch him this week, he’ll play a Monday night residency at the Bootleg Theater during March.
The Wiltern: 3790 Wilshire Blvd. Mid City. Tix: $27-34.

FRIDAY: Steel pedal guitarist Robert Randolph and his Family Band infuse funk, soul, gospel and jam. The band is known for its lively stage performance. Randolph’s playing has led to such diverse gigs such as recordings for Raphael Saadiq, sitting in with Led Zeppelin, and opening for Eric Clapton.
Canyon Club: 28912 Roadside Dr., Agoura Hills. Tix: $41.55.

SATURDAY: The Beatles’ Revolver and Abbey Road will be presented by the Wild Honey Orchestra to benefit for two charities. The orchestra will host a slew of guests including The Bangles, Matthew Sweet, The Three O’Clock, Kristian Hoffman, The Muffs, and members of The Archies, Dramarama, Beach Boys, Wings, Paul Revere and the Raiders, REM, and also a “very special” unannounced guest. The night’s proceeds will go towards providing music instruments for children, adolescents, and young adults suffering from chronic or life altering illness for the Children’s Music Fund. Also benefitting will be Autism Think Tank, an organization that brings together top autism specialists via internet medical conferences to improve the quality of care for those effected by autism.
Wilshire Ebell Theatre: 4401 W. 8th St., Miracle Mile. Tix: $27 – $105.