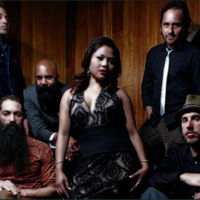 This week’s must-see L.A. shows include a few visitors from the U.K. as well as some hometown heroes.

MONDAY: Glasgow’s hailed synthpop band Chvrches plays a gig in support of their recently released album entitled The Bones of What You Believe. The trio was ranked on the BBC’s Sound of 2013 list as one of the most promising bands of the year.
Wiltern Theatre: 3790 Wilshire Blvd., Los Angeles. Tix: $31.50.

Could anything be any more appropriate then Petula Clark appearing in downtown? As part of An Evening With Petula Clark, the Grammy Museum will host the 1960s British hitmaker as she chats with executive director Bob Santelli in a discussion about her musical life, performs material from various eras of her career, answers questions from the audience and signz copies of her latest release Lost In You.
The Grammy Museum: 800 W. Olympic, downtown. Tix: $20.

TUESDAY: Fresh off a stint touring major summer music festivals, Jesse Ware performs selections off her debut album Devotion. Starting as a back up vocalist, the English performer has used her melancholy vocals to create her own brand of downtempo, R&B-tinged electronic music, catching the ear of many contemporary artists, most notably Disclosure, who collaborated with her and has helped her gain a healthy buzz.
House of Blues: 8430 Sunset Blvd., West Hollywood. Tix: $41.

Take a sonic trip back to the ’60s with this tour kick off for Mr. Elevator & The Brain Hotel, who pay homage to the era with a healthy dose of guitarless, Farfisa organ-heavy tracks that recalls bands like Love and The Doors. Also on the bill and not to be missed are Mystic Braves and Chicano Batman, making this night a trifecta of vintage psychedelic sounds.
The Smell: 247 S. Main St., downtown. Tix: $5 at the door.

FRIDAY: Heading to the OC on a Friday night might be a stretch, but it’s totally worth it to catch Dengue Fever. They’ll be releasing their Girl From The North on December 3, continuing the band’s signature combination of ’60s Cambodian pop and psychedelic rock. Lead singer Chhom Nimol sings in her native Khmer, and her live stage presence is a sight to see.
Detroit Bar: 843 W. 19th St., Costa Mesa. Tix: $15.

SATURDAY: Sure, we all remember Morris Day & The Time for the 1980s Prince-era chart topper “Jungle Love,” but the band deserves more credit for an impressive roster of funkified tunes (“Get It Up,” “Cool, Girl,” “The Bird,” and “Jerk Out”) that may not be as widely known. Day’s style and showmanship make his live sets come alive, but all we want to know is, “Will Jerome be there to bring him his mirror?!”
Club Nokia: 800 W. Olympic, downtown. Tix: $20-$50.