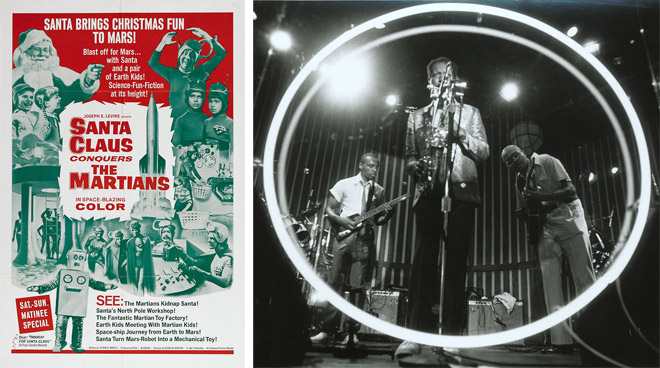 Instead of spending time in shopping mall, spending money you don’t have on gifts for people you don’t really like, try one of these options.

Joel Hodgson LIVE: “Riffing Myself” + MST3K “Santa Claus Conquers the Martians”
Cinefamily brings in Mystery Science Theater 3000 creator Joel Hodgson who will not only send up a schlocky 1964 cinematic masterpiece about aliens who kidnap Santa because there’s no one to give their children presents on Mars, he’ll gab about his love of B-movies, his search for a ventriloquist’s dummy, and the origins of MST3K. (Friday Dec. 7 – Saturday, Dec. 8, various times; Cinefamily) More information

The Hot Chocolate Nutcracker
Debbie Allen’s popular seasonal tribute returns for its third year along with the production’s three memorable narrators: mice by the names of Harvey, Schmink, and Buckey. Expect to be transported to sweet and far-flung locales such as Egypt, Russia, and Candy Cane Lane. The original score is by Mariah Carey and Arturo Sandoval, among others. (Thursday, Dec. 6 – Saturday, Dec. 8, 7 p.m. and 1 p.m.; Royce Hall) More information

Ceviche Nights
In preparation for his upcoming cevicheria, Paiche, chef Ricardo Zarate is hosting a pair of Ceviche Nights at Mo-Chica. The first of a two-part series will feature guest chef Josiah Citrin of Mélisse and dishes inspired by the star ingredient, uni. The cost is $85 per person, with an additional $12 charge for a flight of beers from New Belgium Brewing. Ten percent of the proceeds will benefit the Red Cross’s Hurricane Sandy relief efforts. (Sunday, Dec. 9, 5:30 – 10 p.m.; Mo-Chica) More information

Marina del Rey Holiday Boat Parade
Instead of walking or driving, relax and let the holiday cheer sail by. This year marks the 50th edition of the competitive Marina del Rey Boat Parade, which features fireworks, celebrity hosts, and hundreds of decorated yachts blinking and glittering on the water. Several restaurants along the shore offer views of boats that are as animated as the floats in the Main Street Electrical Parade. (Saturday, Dec. 8, 6 p.m.; Burton W. Chace Park) More information

For the Record: John Hughes (Holiday Road)
Wine, dine, and “Auld Lang Syne” at the 360-degree dinner and concert extravaganza. The holiday experience will showcase seasonal favorites and songs from the director’s favorite movies including Home Alone, The Breakfast Club, and Sixteen Candles. Feel free to reminisce and sing along to. (Thursday, Dec. 6 – Dec. 30, 8 p.m.; Rockwell: Table & Stage) More information

Ornette: Made in America
Released in 1959, The Shape of Jazz to Come is one of the great albums in American music, but Ornette Coleman, the saxophonist behind it, remains enigmatic. Shirley Clarke’s 1985 documentary digs into the life of the free-jazz innovator through performance footage and interviews with fans like Yoko Ono and William Burroughs. (Friday, Dec. 7 – Thursday, Dec. 13, various times; New Beverly Cinema) More information