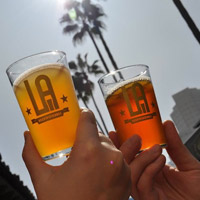 Normally, this is a list of the Top 5 Weekend Events, but this weekend, there’s so much going on, we’ve made a Top 10 list. Whether you have a hankering for ballet or sumo, comedy or yodelling, eating doughnuts or drinking beer, there’s way too much to do.

Riot LA Comedy Fest
Aspen, Montreal, and even Melbourne are known for their comedy festivals. L.A., not so much. Abbey Londer, a 26-year-old comedian, has set out to change that with Riot LA, a three-day festival of indie comedy beginning September 21. Patton Oswalt, Marc Maron, Eddie Pepitone, Maria Bamford, and a murderers’ row of jokesters—from the famous to the fledgling—will take over small downtown venues like the punk club the Smell and the Downtown Independent cinema.More information.

Sing-A-Long Sound of Music
Slip on your dirndl, practice your yodels, and assemble a gaggle of Von Trapp wanna-bes for this long-running summer favorite. The movie may have come out in 1965, but for kids and the young at heart, it never grows old. More information.

Lila Downs
Lila Downs has spent a lifetime crossing borders. The daughter of a Mexican cabaret singer and a British art professor, she split her childhood between Oaxaca and Minnesota. On Saturday Downs crosses the border once again, bringing her commanding voice and global sensibility to the Luckman Fine Arts Complex, where she’ll play tunes from her 11th album, Pecados y Milagros (“Sins and Miracles”). More information.

L.A. Dance Project
Choreographer Benjamin Millepied, fresh off tying the knot with his Black Swan star, Natalie Portman, is making headlines again with the debut of his company, L.A. Dance Project. On the program are two contemporary classics—William Forsythe’s Quintett and Merce Cunningham’s Winterbranch—as well as a Millepied original. The premiere marks the start of the Music Center’s tenth-anniversary dance season. More information.

US Sumo Open
Sample Japanese cuisine and sake as you watch international sumo wrestlers like three-time world champ Byambajav Ulambayar compete in
one of the largest annual sumo tournaments in the U.S. More information.

Tarfest Music and Art Festival
Celebrate the La Brea Tar Pits with gourmet food trucks, a Lagunitas beer garden, and a free music festival featuring indie-rock bands like Blondfire and So Many Wizards. To honor the event’s
10th anniversary, LACMA will host an exhibition that runs through October 6. More information.

J.U.i.C.E. Hip-Hop Dance Festival
So you think you can dance? Maybe you’ll reconsider after watching top movers and shakers from the street scene. Spoken word, graffiti art, and DJs keep the party going, on and off the stage. More information.