Home Uncategorized Top 10 Classic Movies that Should be in 3D 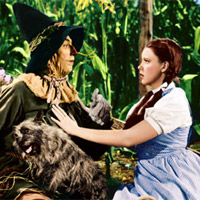 With Life of Pi — an adventure tale about a shipwrecked boy floating around the ocean with a Bengal tiger — opening tomorrow at the New York Film Festival and film purists up in arms about the Wizard of Oz’s unsolicted 3D conversion, we thought it would be a good time to say: Get over it.

9. Lawrence of Arabia (1962): This gorgeous, oversized biopic of a misfit British Army lieutenant (Peter O’Toole with eyes that have never been more blue) who leads an Arab revolt is filled with stunning desert vistas and intense battle scenes ideal for 3D enhancement.

8. The Godfather (1972): Shiny-haired guys with slow-moving bullets. Is this the mob or The Matrix? Don’t forget the cannoli.

7. Apocalypse Now (1979): We love the smell of format-change in the morning. It smells like… victory.

4. The Good, The Bad & The Ugly (1966): It’s already widescreen, but Sergio Leone’s most popular spaghetti Western with its vivid gunfights and dusty landscapes looks even more epic when it goes 3D. Plus, you’ve got one of the best bad guy visages to stare at with Lee Van Cleef.

3. Blade Runner (1982): Darryl Hannah doing backflips, Harrison Ford winding his way through a perpetually rain-drenched night market, shirtless Rutger Hauer giving one of cinema’s most poignant pre-death soliloquies — it’s a no-brainer. Besides, the film has already been released, re-cut, and re-released so many times, you’d be hard pressed to name the “authentic” version.

2. The Night of the Hunter (1955): Robert Mitchum — and his badass “hate” vs. “love” knuckle tattoos — only looks more vicious, more feral, and more majestic when he’s coming out of the screen.

1. Safety Last! (1923): Nearly 90 years later, the sight of Harold Lloyd dangling from a skyscraper’s oversized clock as traffic rushes below is still one of the most iconic images in silent film history. Imagine that jumping off the screen.