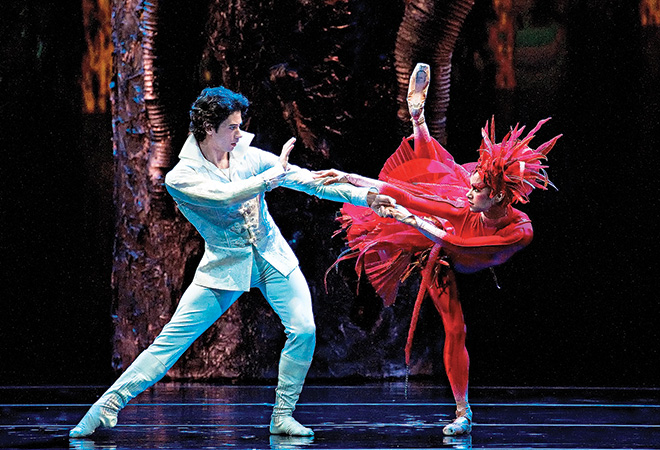 Misty Copeland’s life story—a tale of hardship and remarkable success—has been in the news for years. At 13 she took her first ballet class at the San Pedro Boys and Girls Club and by 19 had joined New York’s American Ballet Theatre. That short trajectory is unheard of. Her swift rise from child prodigy to ballerina was cemented at 24, when she was promoted to soloist, the company’s first African American to achieve that rank in two decades. Now Copeland, 31, tells her story in her memoir, Life in Motion: An Unlikely Ballerina (Touchstone Hardcover/Simon & Schuster), with journalist Charisse Jones. Tonight, in conversation with choreographer Fatima Robinson at William Turner Gallery at Bergamot Station, she gives fans a peek into her world. Here are five pivotal Misty moments, in no particular order.

She Performed with Prince
Copeland got a call from the Purple One, asking her to perform in his video for “Crimson and Clover.” That began a friendship, which has led to their collaboration on other projects.

“I immediately zoned out, trying to envision how I would move to his music as a ballerina. The thought was odd but thrilling. ‘That would be awesome,’ I said.”

She Won First Place at the Music Center’s Spotlight Awards
At 15, after dancing less than two years, Copeland earned first prize in the ballet division in her first competition. She got the attention of two judges: the Joffrey’s Gerald Arpino and American Ballet Theatre’s Rebecca Wright.

“I had danced—happy, free. Then it was over. I was relieved and joyful. ‘I got through all my fouettés!’ I said to the program producers standing backstage. ‘I’m really happy.’ From there it’s all a blur. I won the top prize—five thousand dollars—for ballet. I have the trophy in my apartment to this very day.”

She Was Never Anorexic but She Would Binge Eat
Copeland was told by ABT staffers that she needed to “lengthen” her body. In other words: lose weight. So she rebelled.

“The doughnut company Krispy Kreme had a location on the Upper West Side, not far from where I lived, and they delivered, but only in bulk. So I would call and order two dozen doughnuts, the type of order a company would place. I would then proceed to eat nearly all the sticky pastries in one sitting.”

Her Childhood, With Her Mother and Five Siblings, Was Rough
With the encouragement of her first dance instructor, Copeland attempted to declare herself an emancipated minor. That, combined with a nasty court battle between her mother and teacher, was a “fuzzy nightmare.” Her mother hired attorney Gloria Allred, and in the end Copeland returned to her family.

“I didn’t allow anyone, not even my best friends, to get close enough to see how spoiled my life was underneath. I didn’t invite them to Robert’s house, which was scarred by hostility and violence, or to the random apartments or the shabby motel room my family shared. My classmates didn’t know about the series of men rotating through my mother’s life, or the foraging for change when the food stamps were spent.”

She Won the Lead Role of the Firebird.
Copeland is the first African American woman—ever—to perform this iconic part for a major ballet company.

“There were times during my performance that the applause was so loud I could barely hear the music. Then it was over. The cast carried me, the Firebird, so that she could float away. The audience was on its feet. Shouts of ‘Bravo’ rained down. I couldn’t see their tears, but I heard that many in the audience cried tears of joy, as they danced along with me on that stage.”