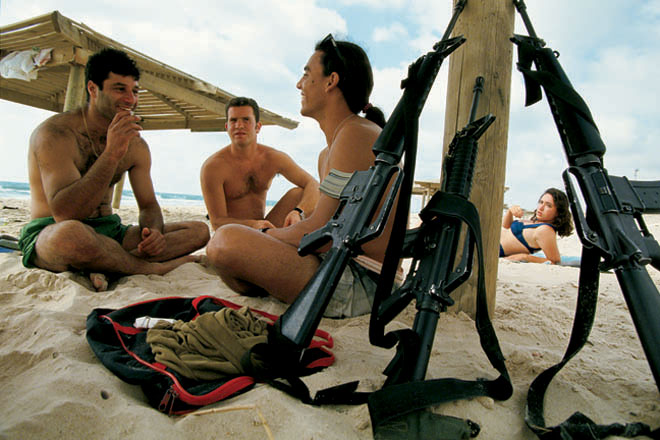 There couldn’t be a more stark juxtaposition than the beaches of Malibu and the violence of Gaza, but photographer Alexandra Avakian has experienced both. The daughter of editor and filmmaker Aram Avakian and actress Dorothy Tristan, she was born in Manhattan and split her early years between upstate New York and London. After being schooled on on movie sets for much of her childhood, Avakian attended Santa Monica High and Crossroads while living in Malibu.

“There’s a big choice between having a nice life on the beach in Malibu and going and living in Gaza,” Avakian says. “There can’t be two more complete opposite realities by the sea.”

As a student at Sarah Lawrence, where she studied British and American literature and art history, Avakian began using her Christmas vacations to visit the Dominican Republic and document Haitian slave labor camps. In 1986 the riots that would eventually oust president Jean-Claude Duvalier began. “I had already been reading about Haiti, and I knew a lot about the culture, arts, and history. I had documented Haitian slave laborers, a lot of whom were children. When riots started in 1986, I knew that’s where I needed to be,” she says.

Her father loaned her the money. She planned to stay for two weeks. Instead, “I kept coming back until it turned into seven months and suddenly I had a wonderful set of black and white pictures. I started shooting color in Haiti as well,” Avakian says.

For the next decade and a half, she travelled around the world, shooting photos in Gaza, Somalia, Sudan, the Baltics, and Central Asia, but has a special affinity for one region. In 1994 Avakian published Windows of the Soul: My Journeys in the Muslim World, a memoir of her 17 years in the Middle East. She is one of several photographers whose work is featured in War/Photography: Images of Armed Conflict and Its Aftermath, an exhibition that runs through June 2 at the Annenberg Space for Photography. Tonight, she’ll be at the Century City museum to talk about her work on the front lines and behind the lens.

How much did you learn from your father about telling a story through images?
My dad was a still photographer before he got into directing. He taught me everything. On one film he put me in the director of photography’s seat. I got to sit in his seat and see how his shots were composed. My father was also an editor and I got to see how to cut film. He would tell me where to cut and why. He taught me how to put images together to tell a story. By the time I was in college I really wanted to engage with the world.

Tell me about leaving Los Angeles.
I love this town. It was a big choice to go east and engage in the world. It was kind of a huge decision but it was something I was really on fire with–the desire to photograph people fighting for freedom. It didn’t even matter what the ideology was. I was interested in the human spirit.

When did you get your first break?
By the time I got out of college I was ready. I got an agent immediately. I didn’t even plan on doing that. And I immediately started working. My first paid job was for Newsweek. It was a homeless shelter and I was actually thrown across the room by a homeless man.

The shot of the soldiers on the beach relaxing next to their guns, where was that taken?
Gaza. I was living there at the time. I lived there for two years between the summer of 1993 and the winter of ’95. The first year I lived there I had to wear a hijab every day. It also meant that I had to go swimming in a headscarf, loose pants, and a veil. I started to go to this Israeli beach because that’s where I could wear a bathing suit. Those guys in the photo were Israeli Navy personnel, and they had seen me around the beach. They were smoking pot. They were off-duty. They were friendly. Also, they let me take photos of them. I shot that picture wearing a bikini. I was there to enjoy myself, but I always have my camera with me. There was that tension. Always. Even though they seem relaxed, they could be called upon to defend themselves at any moment. That is really tough. Israelis and Palestinians have to live with that tension in daily life.

What were you doing in Gaza?
The first time I worked in Gaza was in 1988 for Time magazine. That was at the beginning of the intifada. I worked there for four months. My stepfather, film director John Hancock, and my mother were making a movie in Israel with Mariel Hemingway called Steal The Sky. They invited me to hang out. The intifada had broken out and I became completely absorbed with the story. This began my work in the Middle East. I also worked in Moscow for four years, from 1988 to 1992. For two of those years I lived there and for two years I bounced around all over the world. I was living in Moscow to cover what turned out to be the end of the Soviet Union. It was an amazing time to be there. I went to Africa for six months for Time magazine. Then I moved back to Gaza, but even while I was living in Moscow I was travelling to the Middle East, to Iraq or the Palestinian territories.

What was it like living in Gaza?
When I was living in Gaza, a lot of it was on my own dime. A lot of assignments came after Arafat came back, after the peace process. I moved there because I was interested but I felt people had forgotten about Gaza. The intifada was still grinding on. These problems still existed. Sometimes I get really excited when nobody cares about a subject. Sometimes that’s the time to go because you can be useful in bringing light to a situation. I spent time there in the settlements and I spent time on the Palestinian side as well. National Geographic eventually gave me a grant of $19,000 to finish the job. So I did and it ended up running in the magazine. That was my first assignment for them. Then I started working for them regularly.

What camera were you shooting with?
I think this was shot with a Canon EOS 1, but I use different cameras. Nowadays I mostly use Canon. I think part of what fueled me to want to know what people were suffering in the world was discovering what happened to the Armenian side of my family. I’m half-Armenian and my grandmother’s family was wiped out under Stalin. And on my grandfather’s side they had fled the Armenian genocide on the Turkish Iranian border. These things woke me up.

When and why did you stop shooting active conflicts?
I transitioned out of conflict in 1996. I was dreaming how am I going to stop doing this? It’s very heavy and it takes a part of your soul. I had seen too many funerals. I was dreaming, “How do I stop doing this?” I broke my knee on assignment for National Geographic in Romania, which was the perfect excuse. I delved into culture. I still go to countries where anything could happen, where there’s been a ceasefire that could be broken or a revolution. I’m still interested in photographing places that are undergoing change, but I don’t go to places with open conflict anymore. I think there are a lot of ways to tell the story of people who are struggling without going to war.

What assignments have you shot in the last few years?
After the revolution in Egypt, I went to their great pharoahanic sites for National Geographic Traveller. It was amazing to see no lines at the pyramids. In many ways, that’s the best time to go for a tourist as long as you avoid the hotspots like Tahrir Square. But anything can happen. Salafists took over the railroad 20 minutes from where I was; I had to work around that because I was supposed to go on that train.

And there was a story in Israel, it was about a memoir written by an Israeli writer who was following a guidebook that his parents had written after the War of Independence [in 1948]. It was a lovely memory piece about Jerusalem. I got to visit the great religious sites of all three religions, and I didn’t have to photograph any conflict at all.