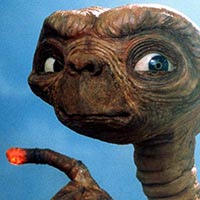 Back in 1982 when E.T. was phoning home, he was probably using a rotary dial or a pay phone, two pieces of technology that must look as archaic to millenials as the handloom did to the children of the Industrial Revolution.

Tonight…
July 29: E.T. the Extra-Terrestrial
This sci-fi film directed and co-produced by Steven Spielberg tells the story of an alien stranded on earth who is befriended by a lonely boy named Elliott. Fun fact: The idea for the film came from an imaginary friend Spielberg created after his parents’ divorce.
Get tickets