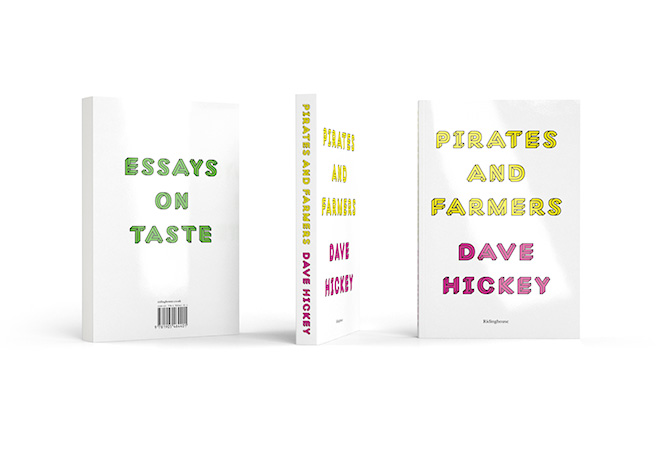 Dave Hickey imbues the world of art writing with a rough and tumble quality. The hermetic realm populated by connoisseurs and consumers appeals to him as an aesthete and a gambler, one who loves both John Ruskin, the Victorian art critic, and Mickey Ruskin, the owner of art world haunt Max’s Kansas City. What Hickey loves best about art is that it is “fugitive”—ephemeral, elusive, precarious. Artworks are always “disobedient” objects that don’t conform to history or theory; in one essay he calls them “orphans in the storm.” “Like the culture of LA graffiti,” he asserts in his new collection Pirates and Farmers, “objects aren’t protected. They last as long as we love them and they give us pleasure.”

Pirates and Farmers, which came out in October 2013, centers on questions of taste and the predicaments of writing about it. “Tastes are fiercely held, protean, and local,” he writes. As with his sublime 1997 Art Guitar, his ruminations take the form of stories combining the biographical and the philosophical, spanning all aspects of his life as a freelance writer, art dealer, curator, consultant to collectors, and teacher at University of Nevada at Las Vegas and Otis. The MacArthur genius grant recipient and unfaltering raconteur announced his retirement from art criticism at the end of 2012. “My life has no narrative,” he states at the opening of an essay, “but it has had some nice vignettes.”

His title comes from his divide between “pirates” and “farmers,” those who seek to continue to chart new spots on the map and those who seek to put boundaries around their land. In these 23 essays, many of which first appeared in his Art in America “Revision” column, Hickey takes walks on the Wilde side and lets his proclamations abound. He inveighs against the opacity of art school education: “If you want to be an artist and you must go to graduate school, you must bring your own egg, your junk, your talisman, your jones, your touchstone in the larger culture.” In a contemplation on the idea of “cool,” he asserts: “Except for Alain Robbe-Grillet, Charles Lamb, and Bridget Riley, Europeans just don’t get cool.” He deliberates on Hunter Thompson, Jack Kerouac’s On the Road, Pieter Bruegel the Elder’s The Harvesters, California artists (“Objects once dismissed as the products of provincial mindlessness now manifest evidence of the most delicate ratiocination.”), and Chinese opera, which Hickey tells us he first went to on a whim “because a Blue Öyster Cult concert had been canceled.”

Bound in an austere white cover with yellow and purple text, sans blurbs and author bio, the Ridinghouse book (distributed by Bergamot Station’s own RAM Publications) resembles a sleek minimal object pilfered from a gallery vitrine. (Why are Robuchon—on an inside liner note-style bookflap—and James Wolcott misspelled?)

Looking at art is for Hickey a fiercely democratic practice: “Although I was educated as a linguistic theorist, I like being an art critic better, because anyone who disagrees with me can go look at the thing itself and decide for him or herself about the justice of my argument.” A key essay—and one of my favorites—is on Sam Sheridan’s mixed martial arts memoir A Fighter’s Heart. Hickey understands that writing about taste means writing about the tussle. “Today,” this septuagenarian gadfly declares elsewhere in Pirates and Farmers, “since negative reviews don’t exist anymore, there is a job I would really like to have: Official Art Executioner of the United States and Europe.”