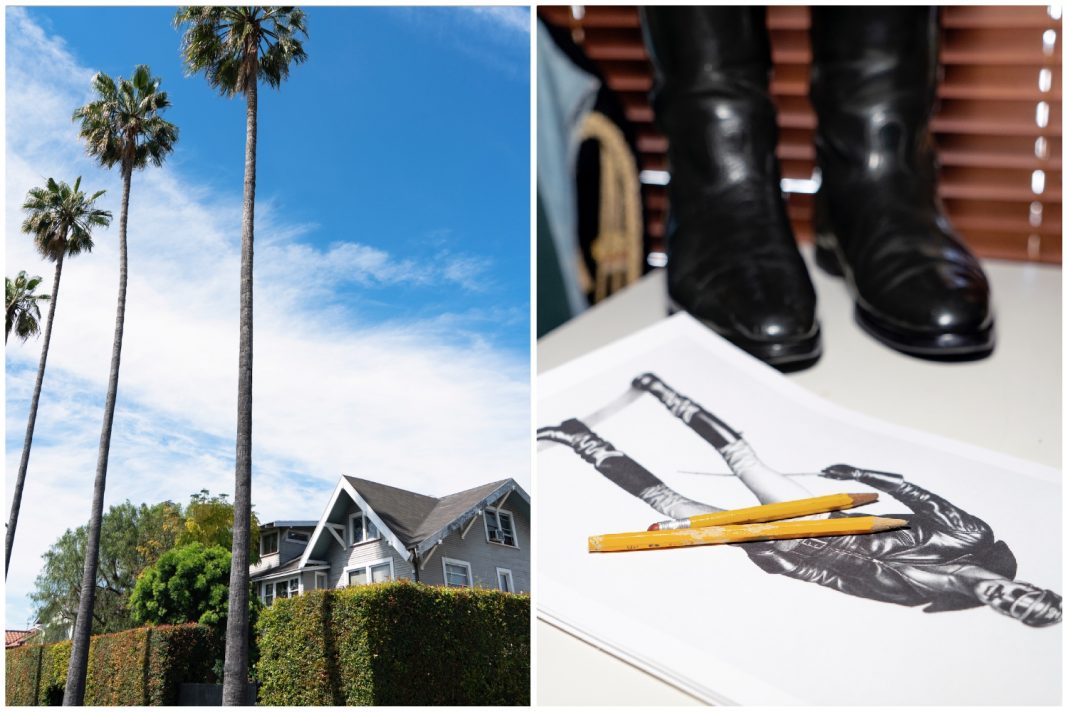 Gay sexual desire has long been downplayed or dismissed in order for people to present as “acceptable” and not offend. Tom, however, focused intently on drawing his desires, not perceptions of decency. Born in 1920, he was sketching lustful male figures at a time when homosexuality was grounds for imprisonment. He lived out loud on paper, creating scenery and scenarios born of fantasy. The artwork served as his form of protest. He once recollected, “A gay man was made to feel nothing but shame about his feelings and his sexuality. I wanted my drawings to counteract that, to show gay men being happy and positive about who they were.”

The sexual positivity modeled in Tom’s drawings and life is still thriving inside the walls of the Tom of Finland House. Shrouded in tall shrubbery and set behind a locked wooden gate, the house is abuzz with activity and serves many functions. Here’s a look inside.

The Foundation continually hosts artists from around the world to stay at the House and focus on their practices. The uninterrupted time of a residency is invaluable to any artist, it’s especially important for those whose erotically charged work is challenging to produce due to culture norms. Australian writer Tom Cho, found his residency, and being surrounded by likeminded people, thrilling. “I felt above all like a fanboy-in-residence, residing with other fans of Tom of Finland,” he says.

Berlin visual artist Rinaldo Hopf is a two-time artist-in-residence and found his work dramatically shaped by the grounds of the House, “I worked a lot in the garden, which added another element to my panorama painting, with the subtropical plants, cacti and the Hollywood sign in the distance.” Hopf was later so inspired by Tom’s work, and the affiliated artists, that last year he created the anthology My Gay Eye/Mein schwules Auge—Tom of Finland Foundation Special, showcasing writings and visuals by, and inspired by, Tom of Finland Foundation. The book, and a Stonewall mural by Hopf, were featured at the L.A. Pride Festival in West Hollywood in its Erotic City.

The legacies of LGBTQ people can be stymied by unaccepting family who trash possessions after ones death. Artists have also experienced the shunning of institutions due to sexually charged themes. Tom of Finland Foundation is welcoming of such work and has an extensive archive of such artists’ works. Accessed by scholars, it holds materials not often collected by traditional libraries. Historian David K Johnson credits the archive as an invaluable resource for his recently publish book Buying Gay, “It is one of a very small coterie of institutions dedicated to preserving the history of gay male visual culture—a culture that was central to the creation of gay male community in the 20th century.” Staffed by volunteers, the well-catalogued collection houses books, prints, journals, three-dimensional artwork, and ephemera.

The bedroom Tom lived in is still intact. His personal reference binders line the bookshelves, clothing hangs on hooks, and several pairs of his tall black boots sit on shelves. The binders provide a fascinating insight into his workings as an artist. The Foundation maintains a catalogue of more than 3,500 images by Tom and over 12,000 images by other artists.

President and cofounder of the foundation Durk Dehner and vice president S.R. Sharp hold that art shouldn’t only ornament the walls in frames but be an integral part of a house itself. Inside Tom House, there are small- to medium-size wall murals, installation pieces, and outside the house is a large mural by HomoRiot. Resident curator Marc Ransdell Bellenger rotates exhibitions from the permanent collection. Guest artists are invited to mount shows, holding an artist opening and/or closing party.

Artist Miguel Angel Reyes hosts a monthly nude life drawing sessions for established and aspiring illustrators to hone their craft and connect with others. Supporting artists has been thematic for the foundation since the very beginning. Last year, former artist-in-residence Michael Kirwan passed away and his memorial was held on the grounds of Tom House, where scores came to share their memories of the impactful and underappreciated erotic illustrator. A tree was planted in the backyard to honor him and his work is now safely within the archives. In 2016, when Rick Castro was violently attacked on the subway and was temporarily unable to work, the Tom of Finland Foundation threw a fundraiser to help Castro meet mounting medical debt.

The House is also the location of meetings to discuss the future of the arts and for groups to plan larger community events and fundraisers. The foundation’s biggest event, a big parking lot party at the Faultline called Tom’s Bar, takes place on Father’s Day each year (this year that’s June 16). This year’s performers include Brooke Candy and Hardcore Tina. The art show, Hard Sweat, previews on Saturday night and is open for the party.

The house may be a shrine to gay male sexuality, but it’s not just for men. Female engineer Danielle Venator calls the house “paradise” and has volunteered her time to help tend to the leather gear. “I get to bring the leather up to snuff surrounded by sexy art and overall amazing energy,” she says. In 2016, the city made the house’s landmark status official, declaring it Historic-Cultural Monument #1135.

RELATED: 100-Plus LGBTQ Icons and Iconoclasts Who Are Shaping Culture in L.A. and Beyond

Fashion Tips From Tom of Finland