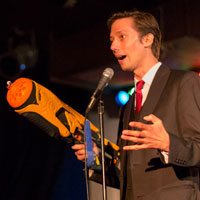 Ralph Waldo Emerson said, “Nothing great was ever achieved without enthusiasm.” In Todd Zuniga’s case, that shouldn’t be a problem. Described as a “bug-eyed, whippet thin P.T. Barnum” (okay, we described him that way), the 37-year-old is the founder, head cheerleader, and emcee of Literary Death Match, a pseudo-competitive reading series. Imagine an MMA octagon — metaphorical, of course — populated not by shirtless muscular dudes reeking of sweat and adrenaline but by writers more commonly bathed in the pale glow of a laptop screen.

Zuniga, who edits the lit mag Opium and is working on his first novel, moved to Los Angeles from Paris last December. In the past year, he has seen the cheeky reading series he founded in New York in 2006 grow by leaps and bounds. To date, Zuniga has staged nearly 250 Death Matches in in 43 cities, including Beijing, Helsinki, London, and Tulsa, Oklahoma. The locale changes, but the setup remains the same: Writers read their own work for no more than seven minutes then a panel of three judges comments on their literary merit. Or their shoes. Or whatever else strikes their fancy. The finalists compete in an absurd showdown, anything from Literary Musical Chairs to Pin The Mustache on Hemingway, all for the glory of winning a cheap medal. “I love being onstage and acting like I have no idea this isn’t the greatest thing I’ve ever seen,” Zuniga says. “It’s weird because when I do that, it becomes true for people. That’s the magic of it.”

How do you select the contestants?
I drew out a matrix. It had four things on each side to make it complete. On one side of the matrix there’s literary, humor/satirical, poet, and non-fiction. On the other side there’s serious/sad, performative, surprising/strange and diverse. Moshe Kasher is a perfect example. His writing is really interesting and it’s nonfiction and he’s a great performer.

I think it’s about crossover. We live in a world where no one can be one thing anymore. If you find the right combination of people who cross over into the right spaces, that’s electrifying.

What do you look for in a judge?
There are so many people who care about books and do book stuff who you don’t immediately assign to the literary world. Jon Hamm is on my list of top four people who I want as a judge. Then there are people we’ve been talking about forever like Diablo Cody, who’s a great writer and has a really interesting voice. In L.A. you have access to people really easily. You go out and sit next to them at a bar or you bump into them as they’re coming out of the bathroom.

The other thing is that everybody here is great on stage because that’s what Los Angeles is about. My goal is to make this a literary spectacle and I’m the P.T. Barnum, although it’s really about people quietly reading their work. If the judges are great and they’re L.A.-ish, they carry that thread of randomness and excitement. In London the judges tend to be demur out of the gate. That’s what’s so great about America. We’re loud and enthusiastic. It’s fun. People here are into interesting things, and they’ve somehow been duped into thinking our thing is interesting.

What happened when you ran into Jon Hamm?
I was at La Poubelle. When he came in, I thought, “Holy shit! It’s Jon Hamm.” And then I thought, “It’s cool. He’s talking to a friend. I don’t have to rush.” I let him settle in, and I went over. I tried to explain Literary Death Match, but I sort of blew it.

How did the idea for Literary Death Match originate?
Readings are boring, but people in New York go to them. I had been going to a lot of them with friends. In 2006, there were two trends. One was to have three readers: one long piece, one that was written that day, and one brilliant piece. The other was to have comedians at readings, which was great but it kind of killed it when the readers would go back on. My two friends and I sat over sushi and thought: How do you make it work? We wanted to figure out a way to make every reader excellent. This [format] was the idea of making the comedy interact with the show instead of having the comedy stop the show. Ultimately, I think people want to feel literary and want to be in a literary space. Literary Death Match is a way to go in, taste-test four different options, and hopefully walk out feeling sated like, “This is my literary fix for the month.”

What makes an excellent show so excellent?
The readers can’t be compared, but the judges still have to pick them. My favorite thing is when people come up to me after a show, usually when their friend has lost, and ask, “How can you compare them?!” Undermining the competitive aspect is my favorite part of the show.

What were the three best Literary Death Matches?
The best events are the ones where something happens that can’t be duplicated.

Our 200th show, which was in Chicago was at a place called Buddy Guy’s Legend. It was a wintery night. It was packed. There were 240 people in the bar. We had a literary spelling bee and someone misspelled Dostoevsky. As we were doing the post-match interviews, somebody in the audience held out their iPhone and shouted, “They spelled it right.” So we stripped the medal from the winner and they respelled the name.

July 11th at the Hammer Museum in Los Angeles was probably one of the best. Helsinki was also amazing. Jeffrey Eugenides was there. He and I were the only ones who spoke English, so I don’t really know what happened, but I now know how to steer the show in any language. The format translates globally.

What are the L.A. events like, in particular?
Los Angeles is a literary town. It’s about community. In New York it’s like a literary party that you show up and get credit for so people will show up to your literary party. Here, it’s a smart, fun thing. I think Los Angeles has some real arguments to be made for it being the greatest city on earth. It has so much space. That’s why Paris is not Paris anymore. That’s also why Berlin has been such an artistic hub. In Los Angeles people are really serious about what they’re doing. To me New York is a place to sell things, and L.A. is a place to make things. The talent level here is insane. My goal is to make L.A. the literary center of the world by 2022.