Home Art To the Front Is Smashing the Patriarchy of Music Photography One Pop-Up... 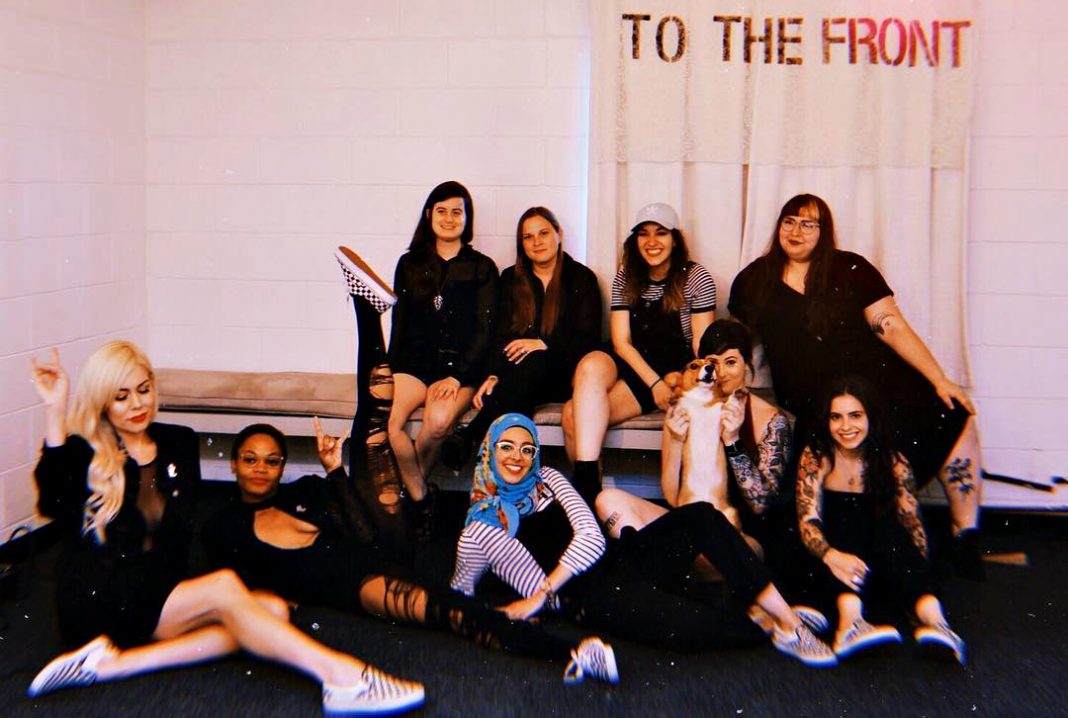 Photo: Courtesy To the Front

L.A.-based music photographers and friends Courtney Coles and Erica Lauren Perez were tired of always finding themselves in a sea of male photographers at every concert and event they documented. They decided to do something for themselves and other women and non-binary photographers, and staged their first gallery show, borrowing a name from the rallying cry of the Riot Grrrl era, “Girls to the front.”

Since that first show, they’ve taken the idea on the road, collaborating with other photographers, artists, and musicians around the country, offering not only a platform for the exhibition of work by these underrepresented artists, but also a space of empowerment, community, and celebration.

On July 14, To the Front returns to Los Angeles for the largest event they’ve done in their hometown to date, featuring more than 30 exhibiting artists and a live musical performance at the AlliesWorldwide space in downtown. In advance of the show, we caught up with co-founder Coles about how the project continues to grow and inspire.

What inspired you to start To the Front?

In December of 2016, Erica approached me and asked if I wanted to put a little show together with her and our two friends, Carly Hoskins and Danielle Parsons, after visiting the gallery show I was in for women of color. Instead of waiting around for someone to invite us to show work, we decided to ask our friends to share a space with us.

I suppose the obvious inequity is the fact that we’re non-men working in music (and some of us are not white), but we’ve done our best to not focus on all the “No”s that led us here and instead focus on the community of artists who’ve made a name for themselves in such a male-dominated industry.

How are the participating photographers selected?

At first it was a simple “Hey, let’s text Dani and Carly and see if they wanna share a space with us!” It grew to a, “Okay, we are going to X city, what artists are in that city?” All artists from past shows are invited to show work in future shows, and we leave space for local artists to join us. We turn to TTF’s Facebook group to ask past artists who they know in each city and we reach out from there.

How has the process of touring the show to new cities been received?

It’s been going so well. Before every show we wonder if people will even show up–and then once the doors open and folks come by, we’re all overwhelmed by the love and support of the community.

How will this iteration of the To the Front show differ from the previous ones in Los Angeles?

On almost every level it’s much larger than the first show. Sound and Fury and Run For Cover Records have been so generous in collaborating with us, and we have artists who aren’t just photographers. In fact, we have 32 artists in this show. A thing that echoes our first show is snacks from local restaurants: coffee from VanillaBlack and vegan treats from Peaches Bake Shop.

How do you want people to feel after they attend the show?

With every show, I hope people walk away feeling inspired to create art that makes their heart sing with the people who make them feel whole.

To the Front: Los Angeles takes place Sunday, July 14 from 1-4 p.m. at AlliesWorldwide, 1054 S. Olive St, downtown. Entry is free and open to the public.

RELATED: A Tour of L.A.’s Gay Landmarks, From Studio One to the Woman’s Building