Fifty years ago, Timothy Washington had a breakout moment when the then-24-year-old’s anti-war engravings of oval-eyed Black figures were featured in Three Graphic Artists, the first survey devoted to Black artists at the Los Angeles County Museum of Art. “I felt very honored to be in the show and very proud. People were very kind,” the soft-spoken Watts native says. “But in my mind, very little has happened because of that show.”

Washington went on to have a solo show in 1972 at the influential, artist-run Brockman Gallery in Leimert Park and was featured in LACMA’s survey A Panorama of Black Artists that same year. But in the decades that followed, he worked as a set painter at NBC to make ends meet. “I learned a lot at NBC in terms of matching colors,” he says. “Whenever I found the right color, I wiped it on my pants. And one day Sammy Davis Jr. stopped me in the hall and asked me to trade my pants with his. I didn’t do it, though. My pants were beautiful.”

Now, a half-century after Washington’s initial breakout, the 74-year-old’s spiritual, Afrofuturist assemblage sculptures and 3D wall works are sought after by top collectors, curators, and celebrities. His 2019 multimedia installation at the California African American Museum, Citizen/Ship, was highly acclaimed, and two of Washington’s sculptures were featured in Beyoncé’s recent film, Black is King, at the behest of curator Jeanne Greenberg Rohatyn.

Last March, he had his first solo show at Salon 94 in New York that featured his totemic personages standing sentry atop an aquarium-gravel-filled plinth. This month, a triptych of his collaged paintings commenting on everything from missing children to the Black Lives Matter protests will be exhibited at Craft Contemporary.

“Tim’s sculptures are like these ancient sages and priestesses that have an authentic spirituality,” says Salon 94 owner Jeanne Greenberg Rohatyn. “They’re very handmade, and they each have an idiosyncratic story that is gleaned from his own path and that of his neighbors.”

When Washington was a child, he lived near Simon Rodia, creator of the Watts Towers. Rodia allowed Washington and his brothers to climb the towers, and that first interaction with massive assemblage sculpture had a lasting influence. Like Rodia’s towers, Washington’s work is interactive—some sculptures are musical, illuminated, even smoking. Though he may be commenting on heady topics like child incarceration or Egyptology, he does so by embedding his work with layers of accessibility: jewelry, Betty Boop accessories, plumbing supplies, sporting goods, mirrors, toys (always something fascinating at a child’s height), bells (to ward off evil spirits), and human teeth and hair from friends. His work has a “generous approach,” Greenberg Rohatyn says. 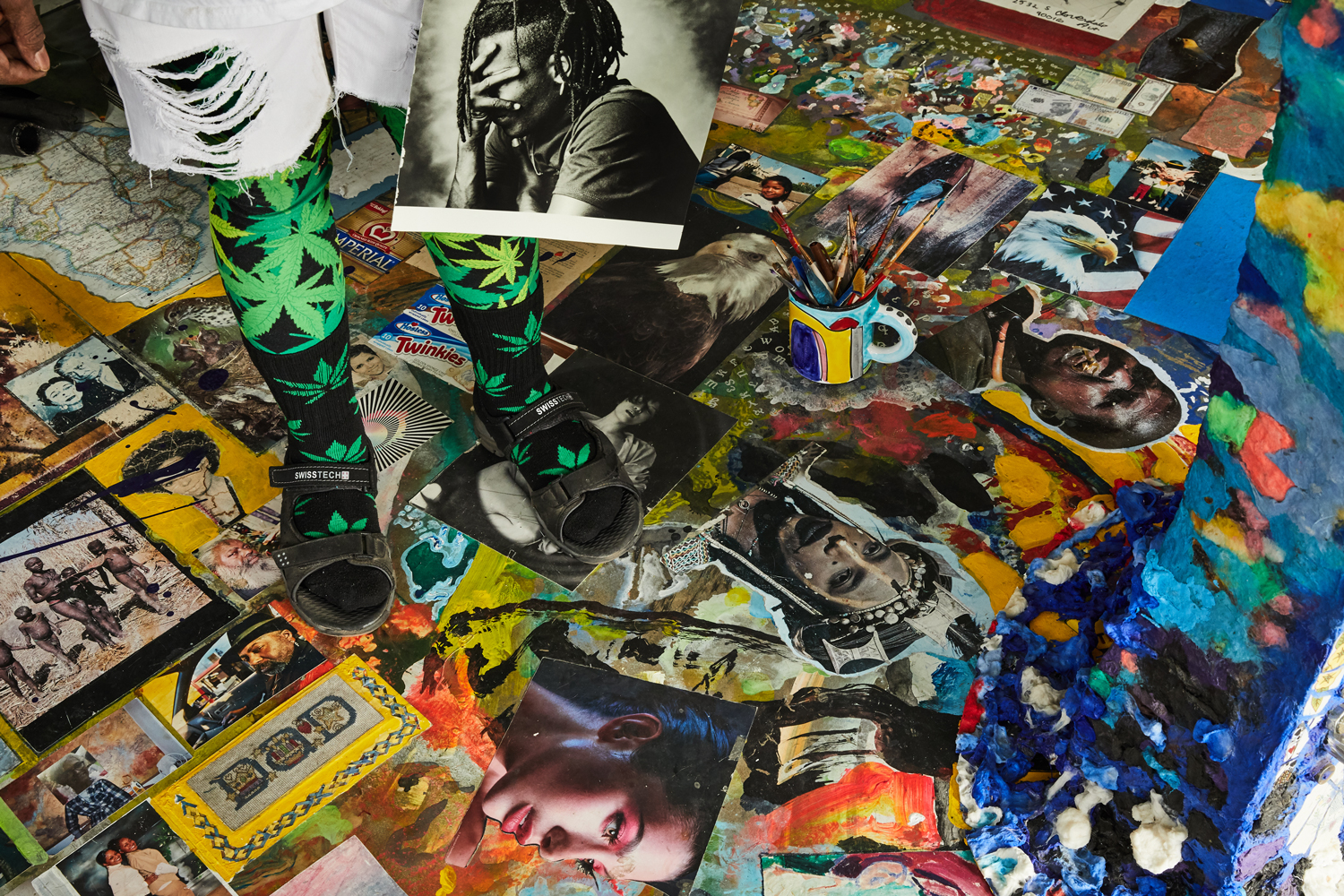 Even the floors of Washington’s Leimert Park studio are a collage—a three-decades-old layer cake of magazine pages celebrating Black culture and his favorite packaging. “I try to find the most colorful boxes, not necessarily what’s best to eat. Yesterday, I put two pieces down in my studio—box tops from Mr. Clean and Cheerios,” he says.

Despite his age and a smoking habit he only recently quit, Washington exudes a contagious energy as he shuffles about the studio dressed in a bright Hawaiian shirt with Air Jordan slides on his feet. He points to a purple patch on a bell-bottomed figure that highlights his signature sculpting medium of pigmented cotton and Elmer’s glue, and says, “I’m still picking cotton, in essence.”

Then he shows off a towering and tattooed marine-hued goddess—Rest In Peace—that made an appearance in a multigenerational group show celebrating Black artists at the Beverly Center in November. While all the late-career attention is nice, Washington is more concerned that the spotlight lasts for artists of color in future generations.

“All of a sudden, Black artists are popular again, and a lot of people are more aware of Black artists. So I sincerely hope things have graduated to a level where the labels get erased and we’re just considered artists,” he says. “I’d like to see that unity.”

Celebrate Juneteenth at these SoCal Events this Weekend