Over a two-month period between August and October of last year, Oklahoma-born, L.A.-based multimedia artist Timo Fahler transformed his Ford pickup into a mobile studio while he trekked between Omaha and his hometown of Tulsa. The 43-year-old Fahler drove around with a 100-gallon drum of water, a big bucket of Hydrocal cement, and a garden hose in the bed of his truck to make impromptu earth casts from ten industrial rebar reliefs depicting various representations of Caravaggio’s The Inspiration of Saint Matthew.

“It was about inspiration—in Caravaggio and the inspiration that was in the steel drawings—and then an erasure of said drawing and the Western canon through casting earth and soil onto these figures,” says Fahler, who chose his casting spots based on his personal experiences with the terrain: a desert on the eastern side of Tulsa where he rode dirt bikes with his friends or a red soil riverbed that held a good memory of his father.

“It was a space of closure for me,” he says. “My dad and I had a rough one, and I remember the red dirt and having conversations when I was a kid about where it came from. It was also a marker. When we passed the red dirt we played a game guessing how long it would take us to get to the desert and whoever was closest won. It’s kind of minuscule, but I was having a hard time finding a good space with him and that dirt holds that for me. I cast with my mom in that space. She likes to help.”

Fahler inherited the materials of his sculptural practice—plaster, rebar, woodwork—from his father, who in addition to running a printing company worked construction jobs around Tulsa. “He taught me how to work with everything, from bending steel to welding,” says Fahler, who has been grappling with fatherhood. He and his wife, Dutch art historian and writer Lara Schoorl, will welcome their first child later this fall. So when he got back to L.A., his personal experiences with fertility merged with art historical icons of it—notably the Venus of Willendorf—and a new “desire to see through” his plaster cast works. After installing several stained glass portals—in the forms of eyes, mouths, and toes—in a tetrahedron-shaped sculpture last fall, he traveled to Amsterdam to apprentice with husband-and-wife Tiffany masters Tineke Koridon & Kees Govers.

“Tiffany style is what they make Tiffany lamps with, so you get finer cuts, sharper details, you don’t have to rely on the large panes and fusing of the glass so much, you just make sharp cuts in order to get these highly graphic images,” Fahler explains on a hot Sunday in August at his downtown studio.

He’s dressed in shorts, Crocs, and a photo-printed button-down, fresh off a long-distance run (he’s also a presence on the L.A. road-runner circuit). Before he leaves town for a residency in Tucson, Arizona, he walks me through the works for his upcoming solo show, opening September 18 at Sebastian Gladstone’s Chinatown gallery, Stanley’s. Gladstone and Fahler have been working together for years, and the dealer even helped introduce the artist to his now-wife.

For the exhibition Fahler created the first four in an ongoing series of Tiffany-style alter egos (a Bozo-like clown, a southwestern-styled Medusa with rattlesnakes on her head, a vaquero, and the Aztec rain god Tlaloc) crafted with dimpled, water, and opalized glass and which hang from ribbons or necklaces adorned with crucifixes or saint emblems. Each piece emerges from the wall, suspended by aluminum casts of his own hands as a puppeteer, making bullhorns, or lacing a cat’s cradle. For Fahler, they are all doppelgängers, but the Tlaloc and vaquero delve “into me growing up in a very white space and really idolizing the brown side of my life, but feeling very disconnected, which is where the hands come in,” he says. “It was really about trying to connect with each alter ego individually.”

On three respective walls in the Chung King Road gallery, Fahler will install the four alter egos, three triangular reliefs depicting sacred and art historical scenes of fertility (some with iridescent glass) propped on upward facing palms, and, hanging from a single cupped aluminum hand, a self-portrait of his opalescent face trapped inside a glass representation of skin in the form of Michelangelo’s self-portrait inside San Bartholomew’s flayed skin as seen in the Sistine Chapel. 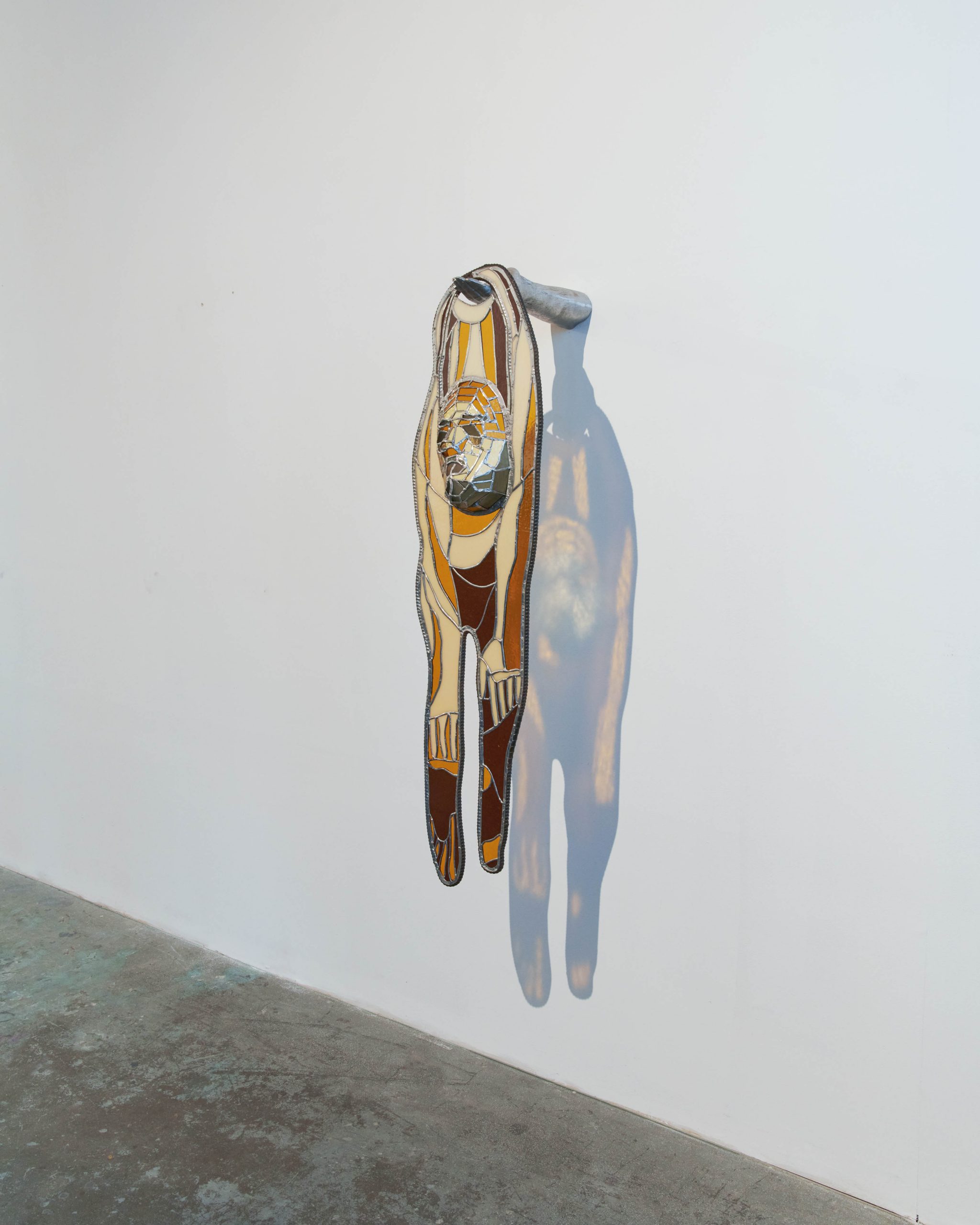 “Each work starts as a 2D piece that becomes a sculpture that becomes a projection behind it,” explains Fahler of the layered effects in the Stanley’s show, which will open three weeks before Nenetech Forms, his two-person exhibition at MOCA Tucson (October 8-February 27) with rising L.A. talent Rafa Esparza. At the museum, Esparza is constructing a sun-gazing pod with an obsidian roof while Fahler utilizes a light harness to project the desert sun through three new stained-glass window works. The two will also be working on a series of collaborative Adobe and plaster works that evoke wall-like structures, cages, fences, barriers that will be utilized for dividing the space and installing, hanging, and projecting art on.

Meanwhile, at the University of Arizona’s Joseph Gross Gallery, the Angeleno artists are asking students “what it means to be humanitarian and how creating space and pushing ideas through biomimetics can change the landscape of capitalist-based biomimicry practice,” says Fahler of applying nature’s bio-engineering to solve human problems (i.e. Japanese bullet trains inspired by bird beaks or thermodynamic architecture inspired by termite mounds).

“We wanted to shift the conversation around biomimicry, to throw out some ideas that apply to humanitarian aid, because people in Arizona are being penalized and face jail time for harboring immigrants or even putting out water,” Fahler says. “You see videos of border patrol agents shooting bottles of water and there’s nothing less humanitarian than that, it’s so dark. This is a laboratory, so to speak, and the museum is a laboratory where we ask the same things of ourselves and our invited artists. Rafa and I are working on structures that both reflect and allow you to gaze back at the sun, the harshest opponent when crossing a desert.”

This last issue is paramount to Fahler, whose mother and her eight siblings were born along the border; his grandfather lived in a cave in Zacatecas with four brothers before going to El Paso to work on the railroad at the age of 12.

“People talk shit on the American Dream,” says Fahler. “But that kid delivering water for 25 cents a day played a part in creating me and that is beautiful.”