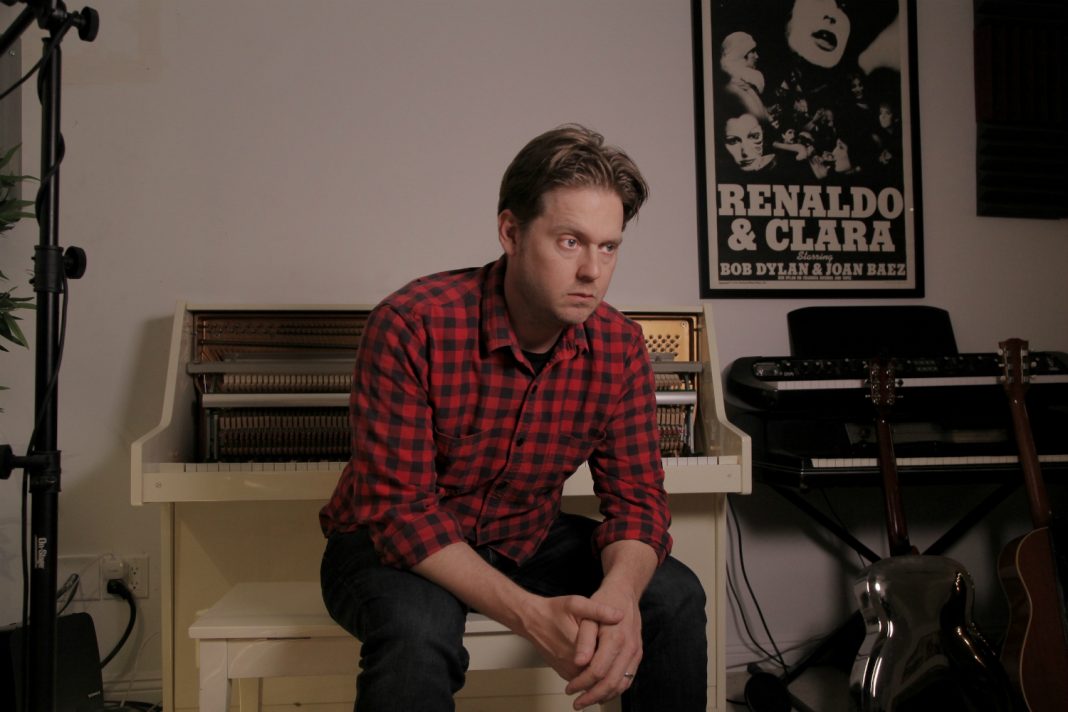 Tim Heidecker is a guy who knows how to run with a joke—even when he’s supposed to be the butt of it. A couple of years ago, the comedian and vocal Trump detractor became the target of an unusual (read: dumb) campaign in which bored basement dwellers started an internet rumor that Heidecker and his wife were getting a divorce. The point was to demonstrate that Heidecker is a “cuck,” aka a cuckolded or weak man. (You know, even though the Commander-in-Self-Tanner has been divorced three times. Whatever.) Someone even took the time to forge some divorce papers to spread around the internet.

“I thought it was so lame,” Heidecker says. “It’s like, who cares? But it seemed to create confusion among them because nobody knew if it was true or not, but it provided a little bit of writing inspiration for me, so I’m grateful for that.”

Instead of trying to combat the goofy rumor, Heidecker decided to lean into it. This week he’s releasing What the Brokenhearted Do…, an 11-track breakup album based on the not-real divorce that trolls dreamed up for him. Heidecker dabbled in political parody on three of his previous albums—the Herman Cain-themed Cainthology: Songs in the Key of Cain,  Too Dumb for Suicide: Tim Heidecker’s Trump Songs, and 2018’s Another Year in Hell—but What the Brokenhearted Do… is as earnest as it gets, drawing inspiration from piano-driven ’70s storytellers like Randy Newman and Harry Nilsson. Some of the bangers dip a toe in Dwight Twilley territory. (I’ve had the first track, “Illegal,” in my head since I first heard it a couple of weeks ago.)

Known primarily for acting in the weirdo sketch shows Tim and Eric Awesome Show, Great Job! and Tim & Eric’s Bedtime Stories (not to mention a star turn as a tanned and tethered dad in Jordan Peele’s Us), we talked to Heidecker the musician about living in Trump hell, his bygone days playing ’60s cover songs, and the creative way to get trolls to piss off.

It wasn’t that long ago [January] that you released the Trump-centric album Another Year in Hell and it seems like so many horrible things have happened even since then. Does anything stand out as the most egregiously terrible?

Well, I mean, these abortion laws seem like a new level. It inspired me to write a tune about it that I put out last week. And you know, these kids dying in what you could start calling death camps. I mean, there’s all the sort of day-to-day pettiness of the back-and-forth in Washington, but then there are these real actually horrific things that seem to also get mixed up in the conversation. But those things stand out to me.

Do you think that you’ll do another political album?

Well, if enough songs gather up. I think that’s the way we approached the last two. Once enough came together, it was nice to have them packaged and all in one place. I don’t really set out to write a full record necessarily of that stuff.

But then things keep happening.

When did you start playing music?

Oh, man, I’ve been playing since I was a kid. I had my various neighborhood bands and, yeah, so it’s been on and off for as long as I can remember.

What did you start with? Piano? Guitar?

I probably started on piano. We had a piano in the house and my grandmother could play by ear. She didn’t really read music, but she could figure out a tune. So she would show me how to play things. I was a big fan of music, and so I got a guitar and took lessons.

When you were young and taking guitar lessons, do you remember if there were songs that you specifically wanted to learn?

I mean, guitar lessons didn’t work too well with me. I’m not a very good student. So I didn’t follow that too well. But then I had friends who played and they taught me some power chords and “Smoke on the Water.” You know the Cream … what’s the Cream song? Doo, doo, doo, doo. They all kind of sound the same. “Sunshine of Your Love.” I think that’s the one everyone knows. Yeah. You could figure out “Day Tripper” pretty well and I figured out “Blackbird.” That was a big deal, figuring out how to play “Blackbird.” So yeah, there was all those kind of ’60s nursery rhymes.

When you started writing your own music, do you feel like you always used it as a way to kind of inhabit other characters like you do in your comedy?

I don’t think I figured that out for a while. I mean, in college I did a group called the Tim Heidecker Masterpiece, which was kind of this Spinal Tap, Tenacious D kind of really obnoxious, bad rock group. And I wrote kind of ridiculous songs in that style. I think there was probably a period before college when I was writing what I thought were serious songs, but they were probably just re-amalgamations of other Beatles songs or something. But then I think more recently I sort of discovered that the Randy Newman kind of method of being able to have this unreliable narrator as a singer, or as the point of view of the song, and it didn’t necessarily have to be me. It could be me singing from the perspective of Donald Trump or a voter. So that’s been a little more recent.

Did your wife have any misgivings about you writing an album about a fake divorce?

You know, I played her some of the songs early on, sort of demos of them. And I don’t think she took them personally. I think she just thought they were universal themes and there’s nothing necessarily specific about our relationship that she could draw out. So I think she’s like, “Yeah, that’s a pretty song” or “I like that one.” I don’t think she’s looking for clues about whether this is really me or not.

In terms of the trolls, do you feel like you kind of leaned in so hard to the joke they were attempting to play on you that they don’t even know what to do with you anymore?

I think I’ve kind of bored them and just by sort of resiliently not changing anything I do, maybe it’s sort of like you keep racking up something and nothing changes, then it doesn’t matter anymore, that maybe they move on. I think a lot of them maybe just grow out of it too, I would think. I always think, I have a little sympathy for them because I feel like I probably, if I was growing up in this age, I might be drawn to that. Not necessarily the politics of it, but sort of the punk kind of … trolling’s not the best word, but just sort of the pranking and sort of the fucking-with-people-online element, which I certainly have done my fair share of anyways with other people.

What are you listening to lately?

This is, like, a really popular band that I wasn’t really paying attention to, but I can’t stop listening to this new Vampire Weekend record [Father of the Bride]. And it’s so good and I know the lead singer a little bit because I did his radio show and I know that he’s a fan of a lot of [Tim & Eric] stuff. But I never really listened to them before and then I just kind of got hooked on this new one and it’s so inspiring. I’m not a guy that really pays attention to new music, pop bands, or whatever. But that one is just like gold all the way through. It’s really cool.

You wrote an entire album about Herman Cain. Have you kept up with his goings-on in life? He’s so weird.

I don’t follow him on a day-to-day basis, but I know he was up for some big Fed position or something. When he pops up in the news, I get flooded with tweets from people and “When is the sequel coming?” But I made that record in a week, by myself, just sort of coffee-induced rage of creativity. A lot of these things, it’s important to get them out very quickly so they don’t lose their relevance right away.

What the Brokenhearted Do… is out Fri., June 7, on Jagjaguwar and Heidecker plays a record-release show Sat., June 8,  at 8 p.m. at Dynasty Typewriter in Westlake (the show is sold-out).