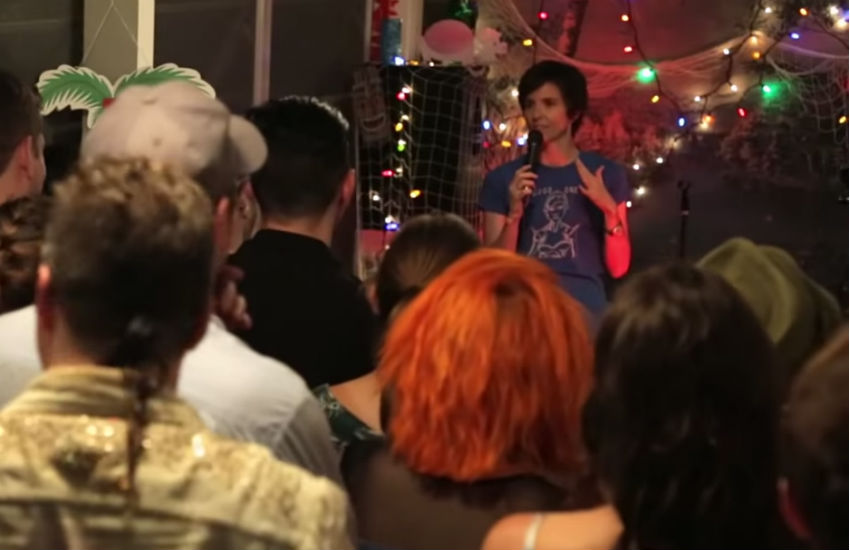 Tig Notaro moved to Los Angeles with two childhood friends from Mississippi almost 20 years ago. Today she is about to follow up her 2013 Grammy-nominated album Live with the release of the documentary Knock Knock, It’s Tig Notaro on Showtime, April 17. The film follows Notaro and fellow comedian John Dore on a tour as the pair work their way across the country performing in the homes and living rooms of fans. The result is an intimate and deeply personal documentary that is as funny as it is moving.

We spoke with Notaro about the film, performing in someone’s living room, and being surrounded by birds and bobcats in L.A.

Where did the idea of touring people’s homes come from?
My friend Martha Kelly, who I have known almost 20 years, came to me, I guess a decade ago, saying she wanted to tour together. Instead of just doing a normal tour I suggested we go into people’s homes. I had heard about folk singers and punk bands doing house concerts. I wasn’t familiar with comedians doing it so we gave it a try and we had the best of times and the worst of times.

What was the best thing about the tour?
The same as the worst thing. It’s just being on the road together and running into different situations and characters. We had a flat tire in a town where nothing was open until after the weekend. So we were stuck in this weird town. Not in the movie, but previously with Martha. Martha is in the movie just briefly. She’s the one who says she is dynamite in the sack. That’s some old footage of her, but yeah, to me they are the same thing, the best and worst moments walk hand in hand.

How did you pick out places to perform?
People would send in videos introducing themselves and where they were planning on hosting the show. We would have an idea ahead of time of where the tour was going to be scheduled. That influenced who we chose to have host us, if they were on the way, but sometimes when a house or person really stuck out we were open to veering off course.

Who shows up for a living room show?
It’s usually a fan of mine who invites me to their home and then it’s up to them to invite whoever they want in the audience. It doesn’t matter to me who’s there or however many people. I usually do anywhere from a half hour to an hour-long set and I bring a friend along. I typically have a local comedian open for me.

How did you get into stand-up?
I have always been a fan of it, ever since I was a kid. I listened to comedy records growing up. I always watched specials on HBO and we’d go see live shows. I was always considered funny and mischievous. It was just kind of a natural direction that I went in. It was always something that I fantasized about doing, but I couldn’t imagine that I would actually be one of the people that got to do that. I tried it out once and I never stopped.

How do you feel about living in L.A.?
I’ve lived in L.A. for the entire time that I’ve done stand-up. I’ve been here 18 years and I actually followed my two close childhood friends out here. They were planning on moving to get into film and television production and I just hitched my wagon to their dreams and followed them out here.

I didn’t even move here to do stand-up. I wanted to be close to them, and when I got here I saw all the opportunities to do stand-up and I started doing it pretty immediately. I ended up staying. I always thought L.A. was Hollywood Boulevard and the T.V. show Cops.

That’s all I knew of L.A. and then I got out here and I absolutely love it. I never want to leave my house, and I can’t think of a better place to live. I am in utter seclusion, just surrounded by birds and bobcats.