Home Uncategorized Through the Years: Images of a Hollywood Halloween 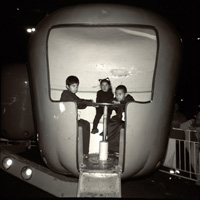 In front of the lens, there are are recognizable scream queens like Jamie Lee Curtis and Debbie Rochon; behind it, there are the people who make all that gore look plausible, or at least entertaining. These days, production designer Corey Kaplan, who offered us tips on getting your house Halloween-ready without a TV show’s budget, is working on Scandal, where she makes the ABC drama looks suitably presidential. But her creepy credits include The X-Files, Cold Case, a slew of suspense-filled TV movies, and something called Hollywood Chainsaw Hookers. She’s also a talented photographer and a big fan of Halloween.

Kaplan has combined her love of both in a long-running photo project. For the last three decades, she has photographed Halloween in Hollywood—and a few other Los Angeles neighborhoods. Kaplan shares some images from her archives, offering us a glimpse of Halloween through the years.