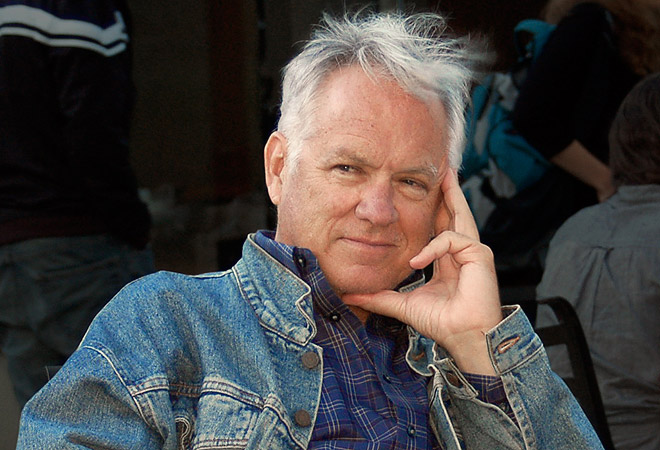 Return To Oakpine, which went on sale Monday, is Carlson’s first novel since 2009’s The Signal. The novel before that, Five Skies, was published in 2007; the novel before that was published more than a quarter century earlier (though to be fair, he produced five short story collections and a YA novel in the interim). If nothing else, this should indicate Carlson’s process: he is meticulous, he is deliberate, and he is thorough—qualities which make Oakpine the heartwrenchingly candid piece of fiction that it is. Here Carlson elaborates on the story behind the story, embracing our pasts, and his hope of creating work that is, above all else, honest.

Return To Oakpine, your first novel in four years, focuses on an old group of friends rallying around a member of their circle who is dying. What was it about this particular premise that gave you the drive to write a novel? Why are you telling this story to us now?
Some years ago, I thought about a reunion story, three old friends meeting again in their old town, and the first thing I wrote was Craig Ralston repairing the old garage for Mrs. Brand so she could care for her son, and before I’d finished the page with him on his knees laying tile I knew that it wasn’t a story—and I’d been writing stories. I wanted to reach for the whole season of their being together, past and present, in a small town of my making and in a time where not all is shot by cell phones. It was the kind of focus that forced me to bear down and see who they were. And, in that year, they were my age, certainly act two (if not three) of a life.

One of the major themes in this novel is our inability to escape our pasts. Do you feel the same struggle as an author? Have your Los Angeles roots snaked their way into your pieces whether you’d like them to or not?
Escape is such a word. Embrace? Our pasts so many times determine the value of what is happening today. Everybody is midway in their story. I’ve lived in California now seven years, and yes, these places are working into my stories. I’ve got a project now set in the teeming, manifold villages that comprise Los Angeles. Place colors everything; It is the thing by which I find my way in my fiction.

In his review of your novel, Los Angeles Times critic David Ulin writes, “This is the tension that drives ‘Return to Oakpine,’ between what we want to do and what we need to do, between our dreams and our responsibilities.” What is it about this conundrum—particularly in connection with the human condition—that intrigues you?
That is a great question and it is probably for better readers than me. I brought these people together in Oakpine and as the story assembled itself, scene by scene, I wrote with both hands, full attention, to see what they might find out. Sometimes (many times) as a writer you submerge in a piece and you cannot chart where you come up. I don’t write for theme, but if you work closely on some guy fixing a sandwich or a window or a table or trying to visit an old teacher or walking down the street on which he was a boy, a theme, a human hope will emerge. I’m trying to be honest here. We’re flawed, but there’s hope in it.

Ron will appear at Pages on July 18th, Vroman’s on July 19th, and Laguna Beach Books on July 28th to discuss Return To Oakpine.