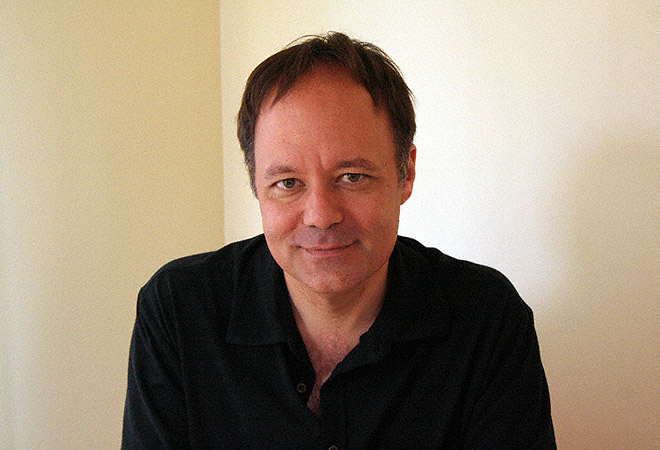 Son of a Hollywood talent agent and a screenwriter, Matthew Specktor, author of American Dream Machine, has worked in the movie business for years. He found the industry and his hometown of Los Angeles to be the perfect subject for his novel about fathers, sons, and Hollywood’s evolution from the 1970s onward. Specktor, who changes his writing habits for each of his books and endures eye-rolling elsewhere in the world when he mentions L.A.,talks to us about this“true blue LA story,” which was released March 26.

Your protagonist, Beau Rosenwald, is not at first glance a likeable guy. What does this do for the reader to have the “hero” be someone that he or she is not rooting for?
The idea of like and empathy are not exactly the same. There are so many dramas on the page and the screen with characters that we are not sympathetic to at first from Mad Men to Hamlet. It’s a classic dramatic strategy. When I conceived of Beau, I was interested in conceiving a character of different aspects, both difficult and warm and human ones. The idea that the movie business is populated by monsters, the grotesque, is a common concept. That’s not all they are, not all we are. They might be abrasive or unattractive but they are deeply capable of sympathy and are exciting prospects for characters. These characters reflect the more difficult parts of ourselves.

How did you come up with the title of the book? What does a “dream machine” mean to you?
The title came very early. It popped into my head when I was about a page and a half into the novel. In its more overt way the title is a commentary on Hollywood and its place in America. It has other private residences in the book. Beau’s son, Nate, is a dreamy character. Much of what is in the book is told by Nate but he is also inventing what happened. This idea is in the narrator, in the novelist.

Why did you decide to begin your novel with a prologue about Hamburger Hamlet and Nate hanging out with someone who might be George Clooney?
Starting the book in 1992 and looking back made sense. That was the time when the industry changed and American culture changed—the business and the movies became more corporate or sequeled than they used to be. I remember being a young man at that time and feeling that in the air. It was a big moment for American corporate capitalism. I felt like that was a place where the lensing of the story could begin. The story follows Nate to that point. He becomes a producer and that leads to his greater downfall and that might seem like a reflection of the business at the time. Hollywood as we understand it has become a formatted and deadly thing. That was part of what motivated me to tell this story. This used to be a dynamic industry. It used to be a classical American story. People used to have ideas. It’s the difference between a culture that builds from the bottom up or from the top down.