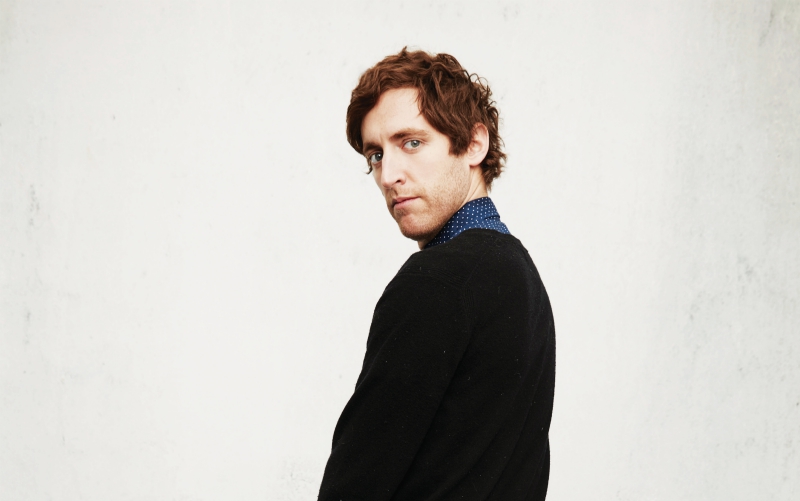 You wouldn’t guess it by looking at him, but Thomas Middleditch is a die-hard fan of the Bachelor franchise. It’s something he admits he could geek out about forever, not unlike airplanes (he has his pilot’s license), silly voices, real ice hockey, video-game ice hockey, and GURPS—that’s the Generic Universal RolePlaying System, aka Dungeons and Dragons on steroids.

The 36-year-old is a lot like his Silicon Valley counterpart, tech savant Richard Hendricks, in that way (season five of the HBO series premieres March 25). Real-life Middleditch can go deep on rose ceremonies and Chris Harrison; TV Middleditch waxes poetic about code and data compression algorithms.

“If I slip into a voice, please mention that I do. Because if you don’t, I sound like a monster.”

When the Canadian-born actor isn’t filming, he stays sharp by doing comedy around L.A.—a two-man show at Largo with pal Ben Schwartz, who played Jean-Ralphio on Parks and Recreation; improv in the style of Shakespeare with pal Sir Patrick Stewart—and turning Snapchat filters into fully formed, fully weird characters on Instagram (do yourself a favor and follow along @tombini). We asked Middleditch to weigh in on everything from motherboards to city secrets, and he obliged—silly voices included.

So we’ve established that you love GURPS.
Yes. Invented by Steve Jackson, who’s abandoned the game. [Chastising voice]: Steve, no one cares about Munchkin! If you put that in there, I’ll be very happy.

I’ll put it in the online version. Three people, dead or alive, you’d recruit for the ultimate GURP session?
You need people to take it kind of seriously, so I don’t know how many comedians I’d have. This is hard. Let’s get Daniel Day-Lewis, because now he’s got the free time, and you know he’d commit to the character. Let’s get Quentin Tarantino to be the Game Master—he’d come up with some moody revenge story for us all to play. And we should get some estrogen in there. It’s always better. Who’d be great? Barbara Boxer. Gotta get Barb. She’s bringing determination and conviction to the table. [Politico voice]: And liberal snowflake morals!

Let’s play a punny improv game.
This is one of my least capable strengths.

Punning?
Punning and comedic fortitude. Zach Woods would be incredible at this. I’m more of the silly voices guy.

Let’s try. I have faith in you. 185 motherboards walk into a bar…
You’re on brand.

…the bartender says, “We don’t serve motherboards here.” And the motherboards say…
[Nerd voice]: “Oh geez, why do you have to be such a hard driver?!” And then they attach themselves to magnets and die because that was terrible.

Ultimate L.A. cheat code?
Everyone says L.A. is a really stressful, bad place to ride bicycles. A lot of people from New York say that, and I would NEVER ride a bike in New York City. I think L.A.’s a fine place to ride bicycles. You just have to be very aware. So ride your goddamn bike. Other than that, use less water, you freaks. Also, if you’re looking for some good chess, go to Tang’s Donuts.

I guess I didn’t give you a good cheat code. I don’t really cheat. I like to play by the rules. I love rules. I made rules for myself as a boy, and one of them still sticks.

Which one?
I had a lot of alone time as a child, but one rule I made was, I had to eat my grilled cheese cut corner-to-corner two ways, so you’d have four triangles. And you’d have to spread them out so the points are in the middle, and then you put your ketchup in the middle. One slice is always three bites: One bite in the middle, one on the left, and the final on the right. And if I didn’t do it that way, I had to slap myself in the face. I don’t slap myself in the face anymore, but I do eat my grilled cheese like that.

Oh, wow. Are you going to teach a child that method?
Oh, yeah. I’m going to go volunteer at youth centers and teach a lot of children.

Pick a hype man: Jean-Luc Picard or Jean-Ralphio Saperstein?
Jean-Ralphio is a natural hype man. Born to hype. But if you somehow got Picard to hype, the clout alone—you’re saying whatever you say, and he’s just like, [Picard voice]: “Engaaaage, motherfucker!” He’s just quoting his famous dialogue. [Picard voice]: “He just went warp nine on you!”

Three dead comedians you’d resurrect for your fantasy hockey league?
Do I want to win? Or do I want to have fun?

Only you can decide.
Well, Peter Sellars, because I hear he’s got a mean slap shot. Gene Wilder—he’s quick on the skates. He can be a great winger. And Dom DeLuise, host of Candid Camera. He can stack the pads in the netminders zone.

Shakespeare character who could open for you at Largo?
This is where I admit that I don’t even like Shakespeare. But it would be awkward if Iago opened any comedy show with a soliloquy about how he’s hell-bent on destruction.

And then Picard comes out to hype.
[Excellent Picard impression]: “That was an epilogue. Get into it. Warp nine!”

RELATED: After 40 Years in Comedy, Catherine O’Hara Is Still One of Our Finest Imports