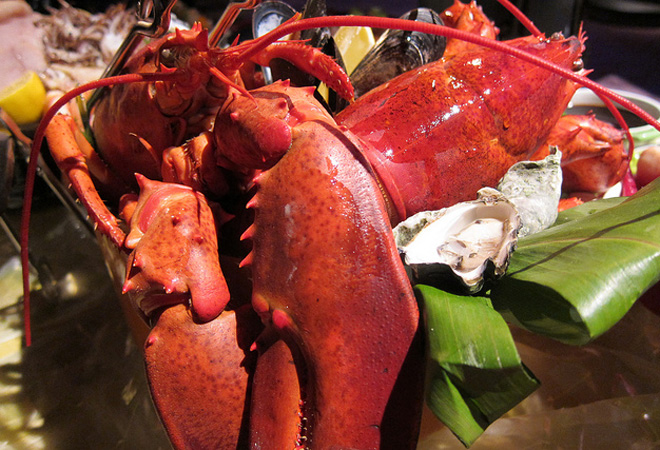 Dave Chappelle breezes through town and there’s tons of lobster, ramen, and fried chicken to be eaten.

LAUGH: Oddball Comedy & Curiosity Festival
At the peak of his career Dave Chappelle left showbiz behind, but he makes a rare appearance at Funny or Die’s comedy bonanza. Flight of the Conchords, Hannibal Buress, and Demetri Martin will be there, too. More information (Sep. 15; Verizon Wireless Amphitheatre)

HEAR & NOSH: Port of Los Angeles Lobster Festival
In the last few years, the staid celebration devoted to boiling and buttering the marine crustaceans has gotten a lot more hip with a lineup of bands that wouldn’t be out of place at a Silver Lake street festival. This year’s performers include Torches, Deap Valley, Sad Robot, Big Black Delta, Pretty Little Demons, and the English Beat. More information (Sep. 13-15; Ports O’Call Village)

SEE: Breaking Ground: 20th-Century Latin American Art
Artists from the Spanish-speaking world once had to fight to be shown alongside Europe’s masters. A survey of such Hispanic heavyweights as Diego Rivera, Rufino Tamayo, and José Luis Cuevas confirms that times have changed. More information (Sep. 13-Nov. 4; Norton Simon Museum)

SEE: When You Sleep: A Survey of Shizu Saldamando
Local artist Shizu Saldamando, who wields a tattoo needle as deftly as she does colored pencils or a ballpoint pen, has her first solo museum show. The retrospective hones in on her fine line portraiture featuring her friends as well as pop culture icons like Siouxsie Sioux and Robert Smith. More information (Sep. 10-Dec. 7; Vincent Price Art Museum)