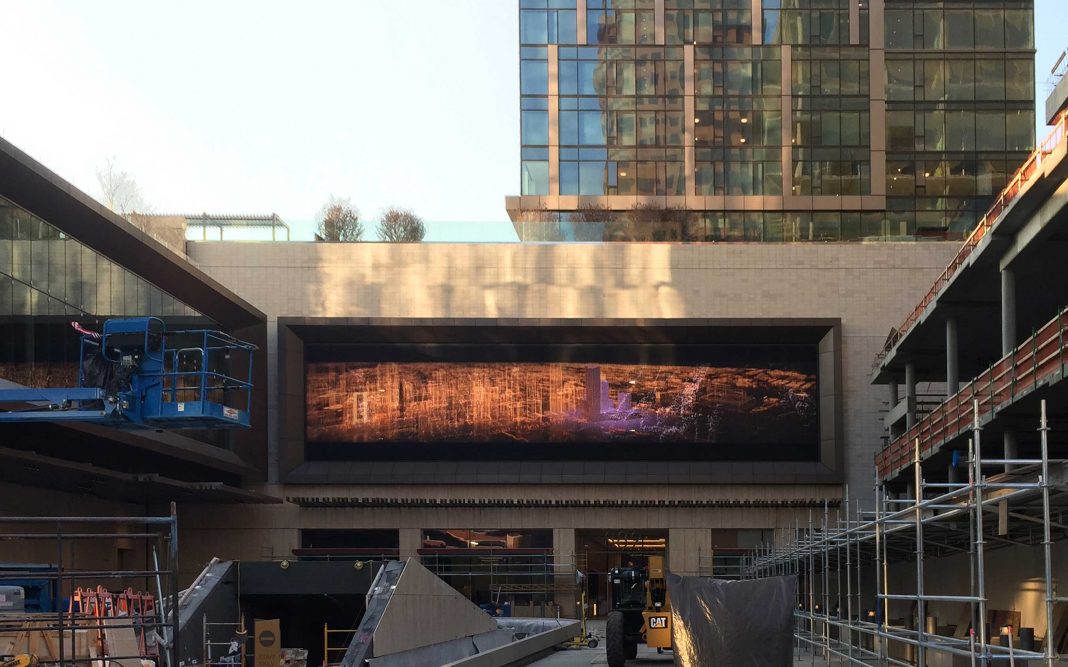 If you’ve been downtown recently, you’ve likely noticed Greenland USA’s massive Metropolis towers going up on Francisco Street. But you may not have seen the 100-foot-wide LED wall that’s been built along the exterior of one of the buildings.

The piece—titled ConvergenceLA—was created by Susan Narduli and Refik Anadol and uses historical and live data from various sources (including RSS feeds, weather activity, and transportation information) to create a living portrait of the city. It contains 435,200 LED lights and took more than 20,000 hours of work over the past three years.

“We developed custom software which takes in this data—what’s happening in the city—and, depending on the data, gives it back to the city in this new form,” says Narduli. “It’s layered with three years of documentation of the city as well.”

ConvergenceLA will be formally unveiled tonight, but you can check it out at any time at Francisco St. and 8th Place.

An interactive website launches today as well. “It focuses on the same data, but in a different way,” says Anadol. Visitors can use the website to explore the data and access two accompanying soundtracks—one directly related the on-site experience, and one meant to be heard while actually viewing the work.

The artists drew inspiration for the project from LACMA’s original Art + Technology program, which curator Maurice Tuchman ran from 1967-1971. “He envisioned a kind of a collaboration between artists and technology companies,” says Anadol. “So I think we are kind of in the same domain, the same inspiration.”

Over the course of the project, Narduli and Anadol worked with public art consultants Isenberg & Associates and more than 30 people, including animators, programmers, software developers, photographers, engineers, architects, and research assistants. “This was a real team effort,” said Narduli. “Not only between our studios, but also with the art consultants, and Greenland, the architects, the city people, and many studios globally. Refik and I are so grateful. You don’t always get to work with such extraordinary people.”

In a press release, Greenland USA CEO Gang Hu called the piece a “stunning reflection of the city and its interconnections.” The first residents of the Metropolis towers began the moving-in process in January, and the adjacent hotel, Hotel Indigo, will soon open.