Home Awards Watch This is What It’s Like to Photograph the Oscars—and Hollywood’s Most Famous... 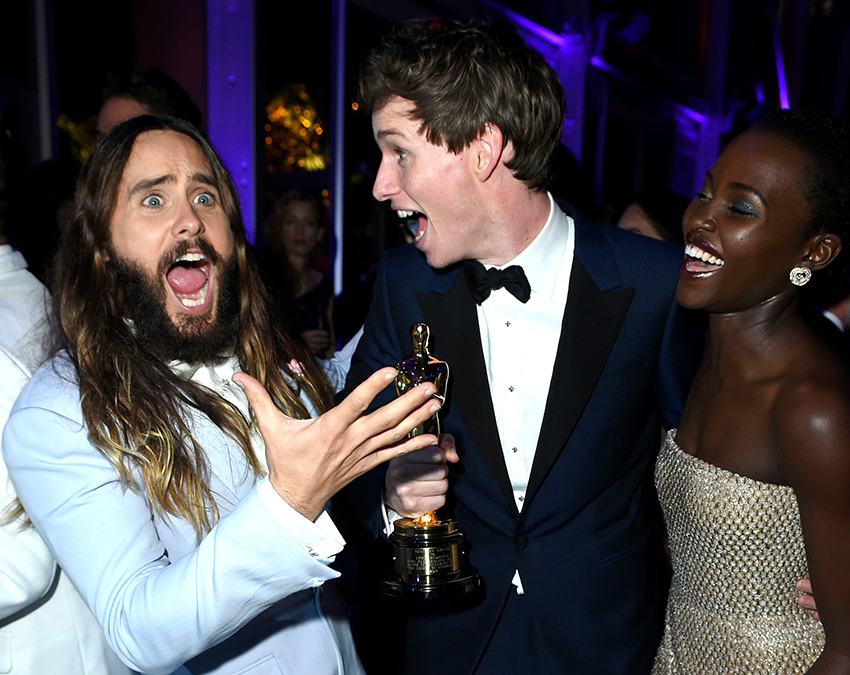 If it wasn’t for a 1998 job posting on Yahoo! (surprise: the Web site had a job board back then), Jeff Vespa may never have stumbled into a career in celebrity portraiture—much less landing a recurring gig photographing Vanity Fair’s prestigious Oscars after-party. “This was a time when people weren’t even looking at the Internet let alone looking at classified ads for jobs,” Vespa says. It was a fortuitous find: after answering the ad, Vespa shot the premiere for Warren Beatty’s Bulworth. Afterward, he picked up more events, and only two and a half years later, he founded Wire Image. Now he’s responsible for capturing the Super Bowl of Hollywood—and the famous faces that go with it (he even posts exclusive outtakes on his Instagram account). “I like portraits because they’re all about relationships and people,” he says. “They’re about capturing people in intimate moments and being able to capture people for who they are—so you can document them and essentially remember them.” As he gears up for Oscar Sunday on February 28, Vespa takes a look back at some of his favorite shots, recalling them in his own words below. There is a really funny story about this photo. I was shooting him alone on a balcony of the Palais in Cannes. It was totally private, and no one had access except us and his publicist—who had left. All of a sudden, when I was shooting, this woman came out of nowhere and started shooting pictures on her phone saying, “Leo look over here” So I was like, “Excuse me but can you please just give me a moment with him,” and Leo says, “Oh don’t worry about her, that is just my mom.” It was so hilarious. I was a bit embarrassed, of course, but I knew it was funny as well. I became friends with his mother after that. Out of all the pictures, this is the craziest and most fun. Because that is Jared. He had won the year before and went around the whole party taking pictures with everyone with his Oscar. We had a blast. He walked in this year and just started praising Eddie. He was overjoyed for him and was like, “You won, man!” This is one of those shots that went around the world. I love the way Brie looks in the photo. She is no longer a girl in this—she is a strong woman. This was shot for Room, so I think it is really apropos. This was at the end of the night, and all the Lord of the Rings people were sitting around with a giant table of Oscars. I walked by, and I said to Peter, “We have to take a picture of you and all the Oscars.” It was too good. This portrait was done for the movie Shame. I had already met Michael on Inglorious Basterds; I spent a lot of time with them throughout the year of promoting that film. The cast was talking about how Michael was going to be this huge star. So I kind of kept watching him to see when that was going to happen. He was on the verge of that at this moment, and you could really feel it. Just a sweet moment to capture: Kate with her parents. This doesn’t happen that often—a celebrity out with their parents—but it was a great night for them to share. This shot is one of my all time favorites. People really love it and comment about it all the time. The funny thing is, I have shot him many times after, and sometimes I think, “I have the best picture of him I am ever going to take—how can I top that?” I had been working with Tim at the Actor’s Gang for a while, so it was kind of special to be there for him. When he saw me he stuck out the Oscar and said, “Look, Jeff!” I have watched Saoirse grow up. Of course it took me years to be able to say her name. To see where she has come from and now to be nominated is truly wonderful for her. I love the way she really confronts the viewer in this shot. Her eyes are so powerful—they say everything. After spending a whole year on the festival and awards circuit with him, I knew when he won that I wanted to get a special picture. I said, “You and me, let’s get a shot for us.” He went over to the table and just turned it on. I loved this moment. I have been photographing Alejandro for years. The first time I met him was in 2001. In 2006, we did a shoot together, and I used old 8×10 Polaroid film. That film is very difficult to work with, and sometimes you get interesting results. The film had a light leak, so in one corner there was a white streak coming across the picture. It was really a mistake in the film, but he loved it. She is such a beautiful girl. This was the year after The Royal Affair, so I already knew who she was and to look out for her. It is great to capture people in these moments when they are beginning to rise in their careers.

All photographs by Jeff Vespa