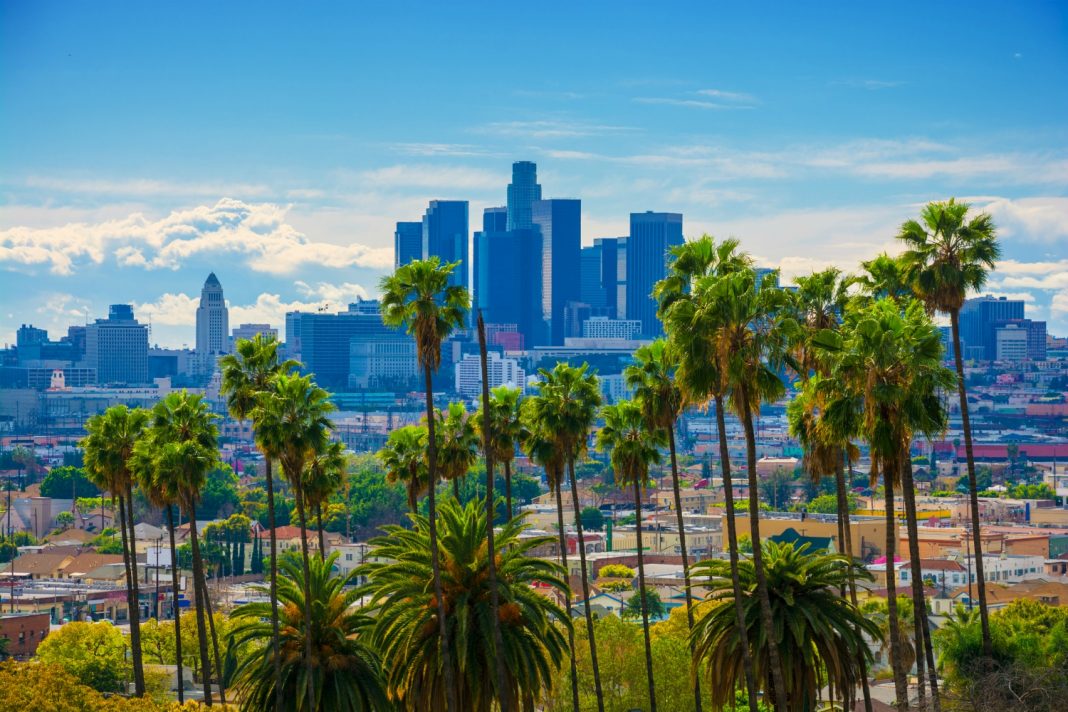 The following is an excerpt from the new book This Is (Not) L.A., out September 6 on Knock Knock Books. Billed as “an insider’s take on the real Los Angeles: debunking the cliches, crushing the haters, and generally making you wish you lived here (or happier that you already do),” author Jen Bilik’s book takes on popular L.A. myths about L.A., for instance that it’s full of “airheads,” that it has no high culture, and that nobody walks to get around (a myth we recently addressed, as well).

In this section, Bilik addresses an oldie but a goodie: that L.A. is a desert. Natch, that is not the case.

THE REALITY: L.A. IS NOT A DESERT.

Sure, our weather gets hot and dry at certain times of year. We have natural cycles of drought. Our hillsides turn brown in the summer. And yes, it’s really hard to provide enough water for the nation’s most populous county. But a desert? Not even close. Scientists have officially deemed our climate Mediterranean.

The super-low humidity and super-high temperatures of a desert climate are only occasionally felt in L.A. We enjoy a lot of moist, forgiving ocean air and generally mild temperatures. The skin feel is lovely. And all those palm trees? They’re imported. Our native trees include walnuts and sycamores—hardly the kind of trees best suited to a desert environment. Los Angeles is certainly no tropical jungle, but before humans tamed the wild and unpredictable L.A. River, much of this land served as floodpain, featuring marshes, ponds, springs, streams, and creeks.

It seems improbable now, but L.A.’s topography and history have been carved by water. Until the late 1930s, the L.A. River often flooded dramatically, jumping its banks even changing course. At one time it flowed from downtown to the Santa Monica Bay, and the river and its sediments helped create a wetland system stretching from Mid-City to Marina del Rey. “It may be hard to visualize,” writes science reporter Blake de Pastino, “but much of what’s now Los Angeles was once a teeming wetland.”

Indeed, the Mexican rancho that covered most of central Los Angeles was named Rancho las Ciénegas—literally, “Ranch of the Swamps.” Ballona Wetlands, north of LAX Airport, is a remnant of this wetland system. Watts and Compton were wetlands, and Inglewood was part of a flowery coastal prairie extending from Venice Beach down to the Palos Verdes Peninsula. A marsh covered 7,000 acres in the South Bay and its vestiges include Willow Wetland, in Gardena, and Dominguez Channel, near the 405 freeway in Carson.

Even in their natural state, however, these water sources wouldn’t support the city’s current population of 4 million. But for thousands of years, people relied on them. The oldest settlements yet found in Los Angeles proper, about 8,000 years old, were found near the Ballona Wetlands. The Tongva people, who were here when European explorers arrived in the 1700s, lived on the water and plants of the river and wetlands. And given what the explorers wrote in their travel diaries, the lush beauty of the place blew them away the moment they encountered it.

Most of us live here our whole lives without knowing how much water was once here— and still is. Where is it? Underground.

Though the city doesn’t get much rain, our mountains get plenty—some parts of the San Gabriels average forty inches of precipitation a year, comparable to Seattle. Mountain runoff fills a massive natural aquifer that lies deep below the San Fernando Valley; this water is the source of the L.A. River. As historian Blake Gumprecht writes, “One can visualize the San Fernando Valley as a huge bowl filled with water that has been tipped slightly, causing its contents to overflow. That overflow created the Los Angeles River.” It also spawned the many springs, streams, aquifers, and ponds that comprise L.A.’s watershed. The Los Angeles Times notes, “The water table was [once] so brimming that water gushed out of springs and from wells without needing to be pumped. In 1904, some 1,700 of these artesian wells dotted the L.A. basin.”

Look at the curves in our streets: many were built along creeks, and there’s a dip as you drive across them. Our canyon roads were first carved by streams, and some highways (including the 110, 5, and 710) run alongside riverbeds. Some of these waterways still exist, including Arroyo Seco, Compton Creek, and Ballona Creek. MacArthur Park Lake is the vestige of a larger, naturally occurring lake.

As urban hikers know, numerous springs bubble from our local hillsides. Kuruvungna Springs, sacred to the Tongva, gurgles on the campus of University High in West L.A.; more than 20,000 gallons pass through it daily. Underground creeks flow as surely as city traffic above, including Río del Jardín de las Flores, which trickles south from Hollywood, popping to the surface on the Wilshire Country Club’s golf course. Sacatela Creek once ran beneath the picturesque Franklin (or “Shakespeare”) Bridge in Los Feliz; now it flows beneath the streets. Bimini Baths, a popular bathhouse during the first half of the 20th century, pumped hot mineral water from a well beneath present-day Koreatown. It closed in 1951, but the spirit of its “velvet waters” lives on at the nearby Beverly Hot Springs, a Korean day spa where slightly viscous, hot mineral water is tapped. It could be mere romanticism, but some born-and-raised Angelenos swear their cells almost seem to recognize something familiar and calming in this water’s essence.

If we’re not a desert, what are we? We do have desert influences, and some experts call us “semi-arid.” But according to the Köppen system—the most common method for categorizing climates—L.A.’s climate is Mediterranean. Not arid, not desert. Mediterranean.

Deserts are characterized not only by a lack of rain, but also by extremes: extreme highs, extreme lows, extreme dryness. Despite its droughts, L.A.’s climate remains temperate. True, the dry, hot Santa Ana winds blow every fall and winter, fanning fires and driving people nearly nuts. But the average weather here is not crazy-hot, crazy-cold, or crazy-dry. We average 15 inches of rain a year, which is four times what Las Vegas receives. And, as mentioned, our natural groundwater is surprisingly abundant, supporting human habitation for thousands of years and creating areas of wet, swampy lushness.

Far from a desert, from 1909 to 1949 L.A. County was “the most bountiful agricultural county in the U.S.,” says historian Rachel Surls. Orchards once dominated much of the area, a heritage that is evident in our yards. As food critic Patric Kuh writes, in parts of the San Fernando and San Gabriel Valleys, “the orchards made way for subdivisions of identical houses with enclosed yards, each one shaded by a single spared tree.” Many backyard citrus trees are “mementos of a time when the area was full of orchards.”

Angelenos still enjoy eating homegrown oranges in February. And yes, fresh-squeezed O.J. in the winter is as delightful as it sounds.

What You’ll Find on the Fabled Four-Hour Journey from L.A. to Death Valley

This L.A. Picnic Spot Feels Like You’re on Another Planet

These Brilliant Billboards Complete the Views They Block