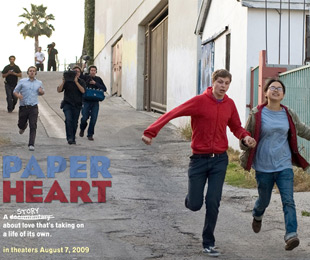 In the Sundance winner Paper Heart, Charlyne Yi plays a somewhat fictionalized version of herself who doesn’t believe in love but doesn’t want to be a spinster.

Directed by Nicholas Jasenovec, Paper Heart is, as Mike White put it after the film’s screening at the LA Film Festival last Wednesday night, a sweet and awkward “gentle comedy” that follows Yi on a cross-country quest alongside her friend/director Nick (played by Jake Johnson) and an omnipresent film crew to find the answers to her many questions regarding matters of the heart.

Yi (the bespectacled musician and actress better known for her role in Knocked Up) interviews college professors, kids, a romance novelist, a psychic, an Elvis impersonator and a divorcé, all of who share their love stories (which are, of course, reenacted with cardboard puppets made by Yi). “How do you know when you are in love?” she asks a woman who married her high school sweetheart. It’s simple, she says. “Wait for the lightning bolt.”

Yi’s lightning bolt comes in the form of the doe-eyed, adorkable Michael Cera. A couple in real-life, Cera and Yi meet in Paper Heart at a party. A few AIM sessions later, he finds her fascinating and she thinks he smells like Christmas. The cameras keep rolling and, as their relationship grows, the film that was supposed to be about Yi’s skepticism begins to document her newfound love.

Paper Heart’s narrative can be confusing at first, but after a while it feels perfectly natural, like Cera and Yi walking hand-in-hand down a frozen food aisle in search of dinner.