Home comedy This American Life’s Ira Glass Is Back in L.A., and He Brought... 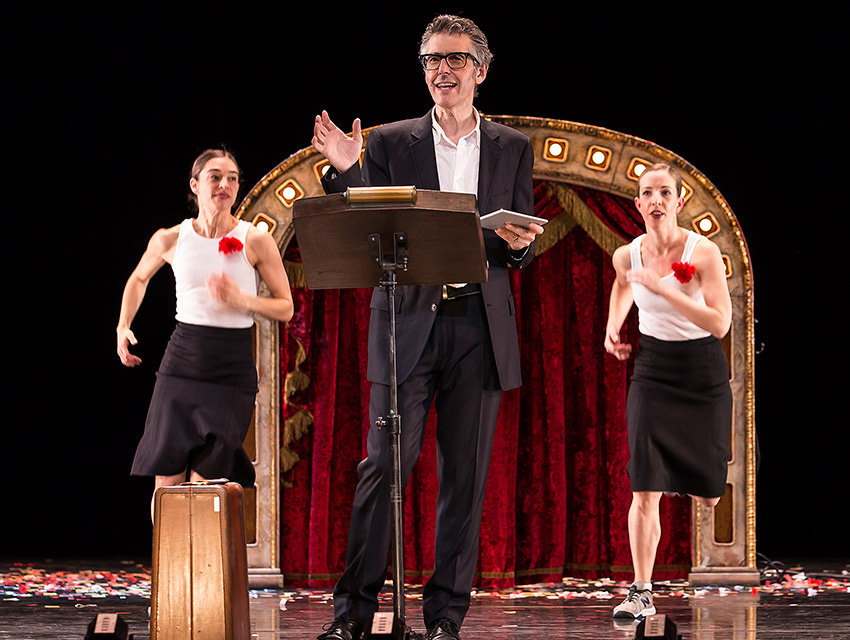 This American Life host Ira Glass has repeatedly said about his show Three Acts, Two Dancers, One Radio Host that “there’s no reason for this show to exist at all.” In spite of that, or perhaps because of it, he is bringing the hybrid show back to Los Angeles for a third round of performances on Saturday at the Ace Theatre downtown.

“I’ve never been in a show where I had to repeat anything,” Glass says by phone from his New York office. “We actually run [this] show in the afternoon for the crew so they can learn the tech. That’s actually the weirdest time of my job, these afternoons where we have to perform word for word the entire show with no one in the audience. I lose all hope for myself. The show feels awful and I feel so tired. But at night it’s totally alive, and the audience is there, so it’s a totally different experience. I feel like an idiot.”

Though Glass regularly asks people on his radio show to reveal personal details, he’s reluctant to give up too much information about himself. “I’m not against sharing personal information,” he says. “My life is generally not interesting enough to be a story you’d want to tell to millions of people. But in this show, I do talk way more personally about myself—I need to as there are only three people on stage. It’s satisfying. It makes every performance more emotional for me.”

As he tours the country, Glass finds that what Angelenos say to him about his work is unique. “People in New York or Chicago, if they recognize me in the coffee shop, will come up to me and say ‘I like your show.’ Which is great. But in Los Angeles, often people will say, ‘I just want you to know that I think your show is very important. What you are doing is very important.’ I don’t think it’s important at all. It’s entertainment. It’s a radio show. It’s not the work that Oxfam does. I don’t know. It’s a peculiar localism. It’s a cultural thing in a way that makes Los Angeles different than anywhere I’ve ever lived.”

Glass appeared in three musicals in high school, all of which prepared him for his current role in radio. “When I was a teenager the art form that influenced me the most were musicals,” he says. “For a straight man, I can recite many musical lyrics. One reason the radio show is built the way it is: Broadway musicals would be sunny but would then get emotional about a bigger something. They were designed as entertainment but also as a way to say something bigger about the world. It’s funny, I’ve gotten back to the thing that hooked me.”

When asked what advice he would give the teenage version of himself, Glass gets quiet. “I’m pausing because I feel like as a nice person the thing I’d want to say to the teenage me is, ‘Don’t be so freaked out,’ ” he says. “I was neither confident nor talented for a long time. It would have been nice to know that things were going to work out okay. But at the same time, that fear of mediocrity is what got me over the hump. So maybe that wouldn’t be a good thing to say. That fear and sadness and deep unsure-ness of whether I’d ever make anything I’d be proud of—maybe that was an important thing to have. My life now would be shocking to the teenage me. This is so much better than I would have ever imagined.”

Serial Update: Key Witness Jay Wilds Presents His Side of the Story for the First Time