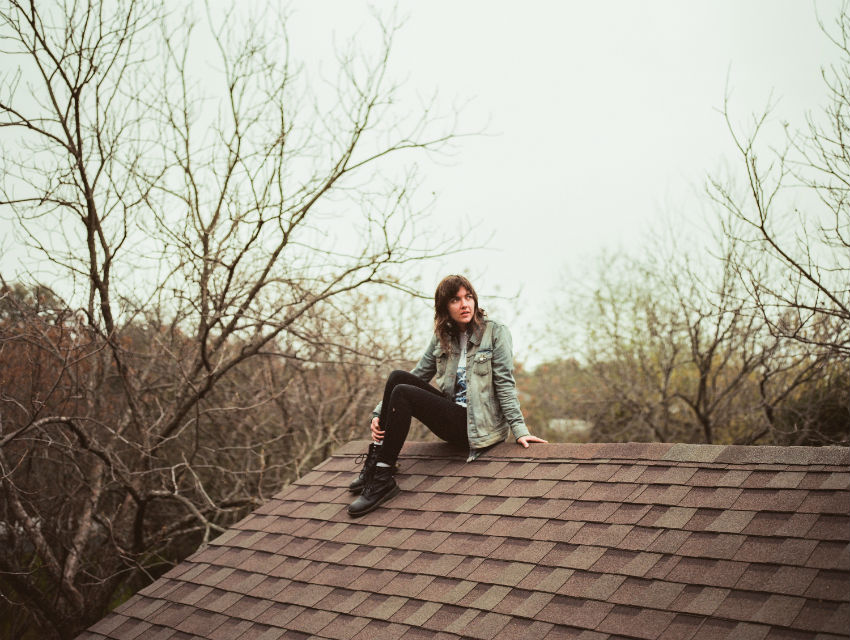 If other artists wrote the lyric “It’s got a lovely garden / A garage for two cars to park in / Or a lot of room for storage if you’ve just got one,” they couldn’t get away with it as handily as Courtney Barnett, who is playing the Roxy this weekend, can.

A master of making the banal interesting, the 27-year-old Australian has earned a reputation for playful, witty lyrics delivered in an ambling, deadpan style, which lends her a wry intelligence without pretention.

“The paramedic thinks I’m clever because I play guitar / I think she’s clever ’cause she stops people dying,” Barnett sings with a unhurried Australian drawl on her breakout track “Avant Gardener,” a true story about a gardening gone awry and the subsequent panic attack in the back of an ambulance.

It’s a story, start to finish, and everything about Barnett’s songwriting makes listeners feel like she’s just sharing stories from her day over dinner, replete with asides and rhetorical questions. Those stories don’t revolve around major life events. Instead, Barnett writes about shopping for real estate or what she sees when she looks out her window.

“I gather bits and pieces [for songs] from everywhere,” Barnett says, phoning from her home in Melbourne, where she sits with a cat in her lap. Her speaking voice mirrors her languid singing voice. “I keep journals and a box full of scraps of notes I write. When I sit down, I try to piece them together, just rewrite the good parts.”

Underneath the song’s pleasant haze and Pulp Fiction references, though, lurks the fear of wasting one’s life.

Her penchant for observation is nothing new. Her older brother and his friends loved music, and, as is often the case with younger siblings, Barnett soaked in their musical taste—Nirvana, Guns ‘N Roses, Jimi Hendrix, Red Hot Chili Peppers. When she started picking up music herself, she says her guitar teacher introduced her to The Beatles, PJ Harvey, and Jeff Buckley.

“Pedestrian At Best,” the angsty first single from her debut LP, Sometimes I Sit and Think, and Sometimes I Just Sit, spells out those early rock influences and showcases her backing band, the Courtney Barnetts (truly, what else would we expect from her?). “I love you / I hate you / I’m on the fence / It just depends,” she sings in what could easily be a Cobain lyric. The Nirvana influence is clear, but it maintains a stamp of originality that’s difficult to define, even for Barnett.

“The new album is a continuation,” she says of her first full-length album, Sometimes I Sit and Think, and Sometimes I Just Sit. It was released March 23 through her own label, Milk! Records, to critical acclaim, if Barnett cared for such things. “It’s a lot of just dealing with life and friends and love and just being a little human in the world.”

As refreshing as her previous EPs were, Sometimes I Sit sounds like a step in an even more defined direction from one of the most promising young songwriters in rock. All the hype surrounding her thus far exists in sharp contrast with her easygoing, shoot-the-breeze personality. Until she was able to make music a full-time pursuit, Barnett held “a million little part-time jobs” from shoe sales to pizza delivery. She held on to a bartending job even while her music career started to gather speed, knowing that all of it could disappear and she’d be broke again.

“I really don’t know how to do anything else,” she says with a laugh. That may be true, but what she does, she does well. Whatever comes next, there’s never too much planning involved. If there were, it wouldn’t be Courtney Barnett. “I’ve got some ideas [for what to do next], but I’m just going to take it as it comes.”

Barnett plays Saturday and Sunday at The Roxy.