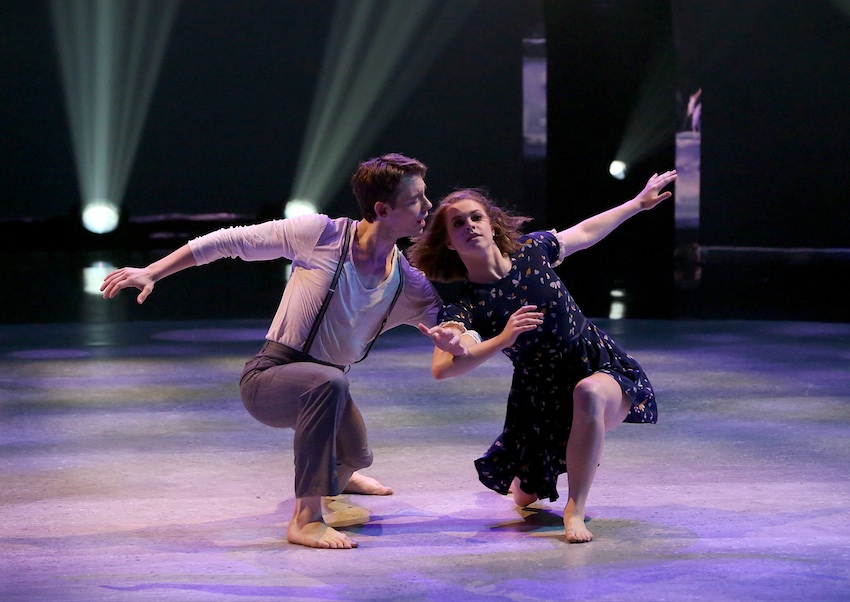 It’s your Top 4, city kids! So You Think You Can Dance is back for the penultimate performance, putting Ricky, Valerie, Zack, and Jessica through their paces as they dance with each other and with all-stars. They start clad in white for a gorgeous opening number choreographed by Travis Wall. We’ve been lukewarm about the opening numbers most of the season but not tonight.

After Cat, dripping with sparkly fringes, introduces Nigel, Mary, and guest judge Jesse Tyler Ferguson (who’s finally at the judges’ table), Valerie and Ricky perform an exhausting, animalistic African jazz routine by Sean Cheesman. It’s amazing they keep their energy up for the long number, but they knock the judges out.

It seems like Jessica has danced with every male contestant on the show except Zack, and she finally partners him for a Spencer Liff Broadway routine. She slinks and spins down a staircase in a sexy red dress that does in fact look like she borrowed it from Jessica Rabbit, as Cat points out, and joins Zack in a cabaret for Ella Fitzgerald’s rendition of “Hernando’s Hideaway” (originally choreographed by Bob Fosse). Ella is brilliant, but the fun tempo and style changes in the music are distracting, requiring a second viewing to see Spencer’s terrific choreography. It’s full of thrilling spins, leaps, partnering tricks, and smooth transitions, and both dancers are wonderful. Mary points out Zack’s incredible Alvin Ailey-style split leap from crouched on the floor all the way up and back down again, and the producers, who have been skimping on the instant replays the last couple seasons, show a great, extra slo-mo replay of it. We did find Nigel’s comment to Jessica oddly sexist: After saying that Zack developed into “one of the most gifted dancers,” he says Jessica developed from a young girl into “an absolutely beautiful woman.” He focuses on her looks rather than her dancing.

Master tap choreographer Anthony Morigerato is seated in the audience, so it’s surprising to see Zack and Valerie working with Tyce Diorio for a contemporary piece. Does this mean Jessica and Ricky will be tapping? (Please say yes!) The tappers dance an absolutely gorgeous contemporary number with Valerie taking on a difficult acting role as a visually impaired person. It’s surprising and feels provocative at first, but the routine is so beautiful: uplifting, moving, and gorgeously danced. As the judges point out, the dancers approach it with such honesty and heart, really selling it and keeping it airy. It’s stunning.

Btw, we have to say that this season we’ve really enjoyed the extras like the ongoing mini dance lessons from the choreographers and the clips viewers have sent in for the dance party app. Though tonight’s capers probably top it, especially when Cat accidentally hits Nigel in the face with her microphone. Classic.

Alas, Ricky and Jessica do not tap. Instead they perform a Ray Leeper jazz routine in black pleather. It’s fun and energetic with some neat lifts, and the judges are happy to have the original Top 20 pair together. Jesse is so at a loss for words that he decides to take a selfie instead, which of course he tweets. (If someone takes a selfie and no one tweets it, does it really exist?)

After Jason Mraz performs his beautiful new single, “Love Someone,” the two women pair up for a Nakul Dev Mahajan Bollywood routine. They look stunning in their costumes. Valerie looks like she’s emitting a beam of light straight from her heart, and the two are adorable together. The non-stop energy of the number mixes several Indian dance styles, and the women carry it off well.

Finally, the two men pair up for a rocking Pharside and Phoenix hip-hop routine, and they kill it. In a battle of kings (in baseball hats and jerseys for some reason) Zack and Ricky flawlessly dance the tough, hard-hitting number with tricky partnering lifts—including an odd passage that Jesse makes even stranger by comparing it to Nigel and Mary’s relationship. Is anyone else uncomfortable with that remark?

Kicking off the all-star routines, Valerie dances an Anthony Morigerato tap number with all-star Aaron. The pair carries on a brilliant non-verbal conversation, not just with each other but with Sammy Davis Jr.’s scatting. It’s fun and flirty with clean, crisp rhythms, a great assisted slide, and fun walking riffs by Valerie. Jesse tries to call Valerie the Michael Jordan of tap, but his continuing crush on Aaron leaves him so tongue-tied he can’t get the words out. Adorable.

Ricky, who must be double jointed everywhere, follows up his amazing solo with a beautiful Stacey Tookey routine with all-star Kathryn. It’s a lovely sentiment, with Kathryn acting as Ricky’s guardian angel, lifting him up when he’s down. The dancing is beautiful, but the extra material flowing from her shoulders conveys a very Isadora Duncan vibe (not a good thing) and makes the angel metaphor literal by turning them into wings. After the number, when a completely overwhelmed Ricky grabs onto Cat for dear life, it’s heartbreaking and very sweet. The judges are moved too, with Nigel talking about recently losing two people to the “stupidity” of suicide (but not mentioning the obvious Robin Williams connection). Jesse breaks the tension by parodying Toni Basil with an inappropriate comment about dating Ricky if he were older. Jesse’s clearly going for the cheap, sometimes laborious, jokes tonight.

All-star Aaron returns to dance with Zack, whom he had apparently met during the Season 9 auditions, in an incredible Anthony Morigerato tap number to Billy Joel’s “Piano Man.” It’s so special with the pair balancing each other with crystal clear sounds. Morigerato is so innovative with the music, simultaneously disregarding it and complementing it with his rhythms, and finally throwing in a little waltz clog at the end. This affected us much more than the previous contemporary number. We also learn, before Zack’s incredible solo, why we hadn’t seen much of him before the callbacks: Nigel hated his Atlanta audition. He’s certainly turned around since then.

Jessica closes out the duets with another stunning Travis Wall piece with all-star Robert. Travis is still in fine form, turning emotion into movement and using some violent motions as expression. Grabbing, pushing, and pulling, the dancers tell a compelling story, acting as well as they dance.

What do you think, city kids, after this full night of dancing? Who do you think will take the crown? Is Ricky still a shoe-in for the win, as he has been since the beginning? Will Jessica prove Christina Applegate right and steal the title? Does Valerie have a chance? Or will Zack come from behind and take everything? Cast your votes in the comments.