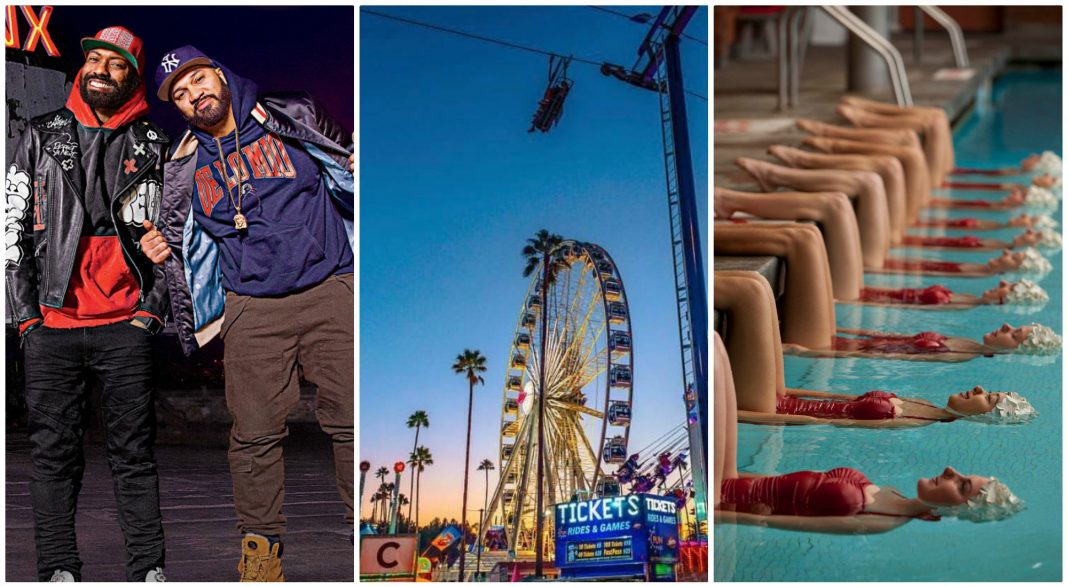 On their Showtime talk show, co-hosts Desus Nice and the Kid Mero, interview A-list guests like Alexandria Ocasio-Cortez, Spike Lee, and Vince Staples, with their signature perspective and humor. On August 5 and August 7, they bring the production to the Theatre at Ace Hotel for two nights of IRL conversation.

Get a taste of the L.A. County Fair with this pop-up mini-fair in Grand Park. A handful of vendors and and rides will set up for an afternoon of family fun–including an entire Ferris wheel! The full-size fair opens on August 30.

Music-centric photography space Morrison Hotel Gallery throws a public celebration to open their new show of photos by Henry Diltz, the official photographer of Woodstock. Tickets run $250, but you’ll get a credit to apply to purchasing a photo to take home.

The Aqualillies are a glam local group that channels the colorful fun of mid-century synchronized swimming shows. It can be hard to catch them unless you’re invited to exclusive shindigs, but every once in a while they do a public event. Their summer show takes place tonight at the Standard in West Hollywood–and it’s free!

Once Upon a Time in Hollywood Dance Party

Club ’90s puts away the Britney Spears CDs for a week in favor of a retro dance night inspired by Once Upon a Time in Hollywood. Dance the night away at Los Globos to tracks from the 1960s and 1970s like you’re Sharon Tate at the Playboy Mansion.

A post shared by BetterOblivionCommunityCenter (@betteroblivioncommunitycenter) on Mar 19, 2019 at 10:01am PDT

Better Oblivion Community Center is the result of a musical collaboration between local rock star Phoebe Bridgers and longtime indie fixture Conor Oberst. You may want to grab tickets to their show at the Wiltern while they last; the duo’s last run of shows in L.A. sold out well in advance.